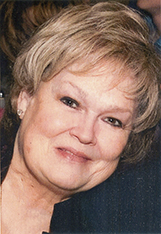 Brenda Nell Hill Drago passed away at her home at 4:45 am on Wednesday, May 3, 2017. Brenda was born May 16, 1940, to Lola Johnson and Thurman Walker Hill.  Born in the small town of Appleby, Texas, Brenda was one of nine children and moved to Port Arthur in 1942, where she lived ever since and devoted her life to raising a family, preserving the city’s heritage and serving its citizens with love.  After graduating from Thomas Jefferson High School in1958, she attended Lamar University and received an x-ray technician certification.  She wed Joseph P. Drago, Sr. on November 13, 1965.  That union made her a member of one of Port Arthur’s pioneering families in the industrial distribution business — Drago Supply Company, founded in 1931.

Brenda served as a lifelong child advocate as a “professional volunteer” in the PTAs at Terrell Elementary School, Thomas Edison Junior High School, Thomas Jefferson High School, and the Bob Hope Hughen School.  Her passion to help sick children and children with disabilities continued through her work for 26 years as a volunteer and later as Director of CHRISTUS St. Mary Hospital Foundation and fundraiser for Children’s Miracle Network.  One of her proudest accomplishments was raising over one million dollars for the first hyperbaric oxygen therapy chamber in Southeast Texas at St. Elizabeth Hospital in Beaumont.  Brenda was also proud to serve as a Commissioner of Pleasure Island, a member of St James Catholic Church, the Service League of Port Arthur, Texas Artists Museum Society and the Port Arthur Historical Society.  Her love of and lifelong service to the city of Port Arthur has been reciprocated in many ways, including as a recipient of the Quota Club’s Woman of the Year in 1985 and the  Port Arthur Chamber of Commerce Athena Award in 2004.

She is survived by her devoted husband of 51 years, Joseph Paul Drago, Sr. and four children, Stacie Therese Lyons and her husband Timothy J. Lyons of Crosby;  Philip Drago, and his wife Deborah Healy Drago of Beaumont; Sarina Drago Hager and her husband Frederick H. Hager, Jr. of Tyler; Joseph P. Drago, Jr. of Nederland; and by her twelve grandchildren, who affectionately called her “B”; Kevin and Caitlin Lyons; Abigail, Matthew and Michael Drago; Jack, Fritz, Henry, Joe, Lucy and Sam Hager; and Mackenzie Drago.

Brenda is also survived by her sister Ada Beth and husband Irwin Dreyfus, her brother Larry Hill and his wife Linda, brothers-in law, Sam Drago and his wife Hanna; Philip Drago, Jr. and his wife Debbie; and her sister-in-law Mary Williams and their families.

The family thanks the staffs of Medical Center of Southeast Texas, Cypress Glenn and Kindred Hospice, with special thanks to her devoted caregivers Lupe Ly, Gloria Lewis, Albina Leiva and Martina Cunningham, Stacy Dubios, R.N. and all of her treasured friends who visited her so faithfully.

A Mass of Christian Burial will be Monday, May 8, 2017 at 2:00 pm at St. James Catholic Church, in Port Arthur, with burial at Greenlawn Memorial Park and reception to follow.

Donations in her honor may be made to St. James Catholic Church, 3617 Gulfway Drive, Port Arthur, TX 77642 (stjamespa.org) or Children’s Miracle Network (cmnhospitals.org).