Ned service center a long time need for the city 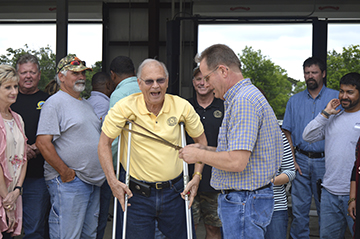 NEDERLAND — Taking care of costly heavy equipment is now a bit easier with the completion of Nederland’s new service center.

“Over 10 years ago we identified this as a need for the department, Nederland City Manager Chris Duque said after a ribbon cutting at the facility located at 515 Hardy Ave. on Tuesday. 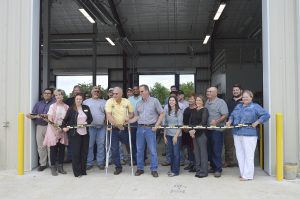 The former service center building has had some issues through the years and its roof was ripped off during both 2005’s Hurricane Rita and 2008’s Hurricane Ike.

The new facility provides sufficient space for streets, water/sewer distribution, solid waste and animal control functions and prepares the public works department for the future growth of the city, he said. 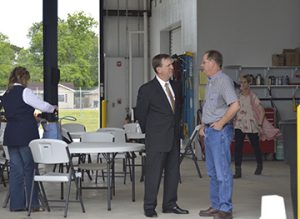 Construction on the $1.09 million facility began last summer and is totally finished with the exception of the installation of a generator.

“One of the biggest benefits of the building is that the bay allows us to work on our solid waste vehicles indoors,” he said.

A heavy-duty crane inside the building will help with heavy lifting.

Steve Hamilton, the city’s soon-to-retire public works director, said the crane has already come in handy when a hydraulic part of a garbage truck went out. 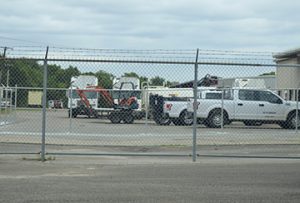 Nederland city vehicles such as these will have plenty of room to be worked on inside the new service center.
Mary Meaux/The News

Duque explained that the facility allows for a safer work environment.

“Before, we had to use some practices that were not the most safe,” Duque said. “Having this set-up allows for employees to work more safely and efficiently.”

Efficiency also plays a role in the reason for the new service center. Solid waste trucks are on the road five days a week. A new truck comes with a $300,00 approximate price tag.

Previously the garbage trucks underwent maintenance outside of the building because the bays were not tall enough.

“In addition, at some point we will likely have some sort of natural disaster and the way this is setup, with restroom facilities and showers, allows us to operate the department through here if necessary,” Duque said.

The city has an emergency management site at the Homer E. Nagel Public Safety Complex on Boston Avenue. Having this site available is a plus for the city because the three main departments involved during a disaster are the police, fire and public works departments.

“During a hurricane or other natural disaster employees can live and work here 24/7,” he said.

Bruce’s General Construction was the contractor for the job and LaBiche Architectural Group Inc. was the architects. Duque said this is the last facility project planned for the city for many years.