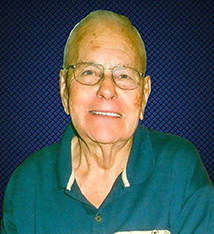 Hollis served his country in the United States Army during World War II, he was a proud member of the Nederland Professional Lions Club, a Mason with the Nederland Masonic Lodge #1368 AF&AM, and he retired from Ameripol Synpol with 40 years of service. He loved being with family & friends, gardening, golfing, hunting, cooking, and serving his community.

Hollis is survived by his two daughters, Melanie Rien of Houston, and Kimberly Bernard and husband, John, of Bridge City; his sister, Naomi Talley of Marshall; his brother, Richard Wilson and wife, Geneva, of Marshall; five grandchildren; four great-grandchildren and a host of loving nieces and nephews.

In addition to his parents, Hollis is preceded in death by his wife, Mary Whitman Wilson; son, Kent Wilson; and brothers, Jim and Tom Wilson.

The family would like to express their most sincere appreciation to the staff of Cypress Glen Nursing Home for all the loving care given to their Dad.

In lieu of flowers, the family request that donations be made in Hollis’ memory to any of the following: The First Baptist Church of Nederland; The Nederland Professional Lions Club; or The Nederland Masonic Lodge #1368.