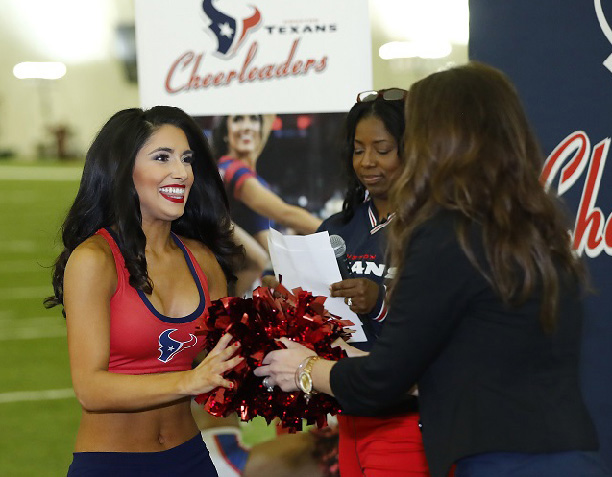 Danielle C. of Port Neches made the dance unit on the Houston Texans cheerleader squad on her first try. (Houston Texans)

When Danielle C. finished her degree in dental hygiene, the 2010 Port Neches-Groves graduate realized she had a life again.

“I stopped dancing because I was focused on college,” she said. “When I moved to the big city, trying out for the Texans cheerleaders was definitely on the list. I just wanted to see what it was all about.”

Now, she and friend Olivia W. know firsthand. They are both among the 35 ladies who make up the Houston Texans cheerleader squad.

“I’m super-excited,” said Olivia, a 2009 Nederland alumna. “I feel definitely blessed. It’s such a great organization to be a part of. … The blessings keep coming in.”

Because they are Texans cheerleaders, Danielle and Olivia are not allowed to verify their last names as a safety precaution. But they have the privilege of representing an NFL franchise not only inside NRG Stadium but in and around the Houston area, too.

“We practice during the season Mondays, Tuesday and Thursdays and are expected to put in 16 hours a week,” Danielle said. “During the offseason, it’s 9 hours. But for 24 hours a day, we’re Houston Texans cheerleaders.”

Both Danielle and Olivia made the dance unit of the cheerleaders, the group that actually performs during Texans games. The other unit is the appearance team, which makes promotional appearances at a variety of functions in the Houston area, and that’s where Olivia started last season.

This season will be Danielle’s first on the team, while Olivia is back for her second year.

“I was on the appearance team, and midway through the season, they put me in to dance during halftime of a game,” Olivia said.

That was the beginning of Olivia’s road to the Super Bowl in February, although the Texans did not make the Big Game. She was one of 10 cheerleaders picked to dance for the pre-game show.

“Every host city has players and cheerleaders make appearances,” she said. “I was attending the NFL Experience and Super Bowl promos three mornings in a row.

“It was just a really cool experience. My parents got tickets to the Super Bowl and watched me perform.”

Despite their close proximities in age and location, Olivia and Danielle never met until they worked out at one of the Texans’ dance classes. That’s where Danielle learned she went to school with Olivia’s fiancé at PNG.

Danielle graduated from Lamar Institute of Technology in 2014 and works as a dental hygienist. Although she’s been in the health profession, being an NFL cheerleader now gives her a reason to adopt a healthier lifestyle.

As for Olivia, a Sam Houston State graduate who earned her master’s degree from Lamar University two years ago, she gets to share a firsthand lesson with students in her sixth-grade language arts class.

“My mom kept sending me email about tryouts to become a Texans cheerleader,” said Olivia, who cheered and danced at Nederland. “I was like, yeah, right, Mom, I’m not going to be able to do that. But then I decided, why not take a risk? That’s what I’ve been sharing with my sixth-grade class. You take risks sometimes to reach your goal.”