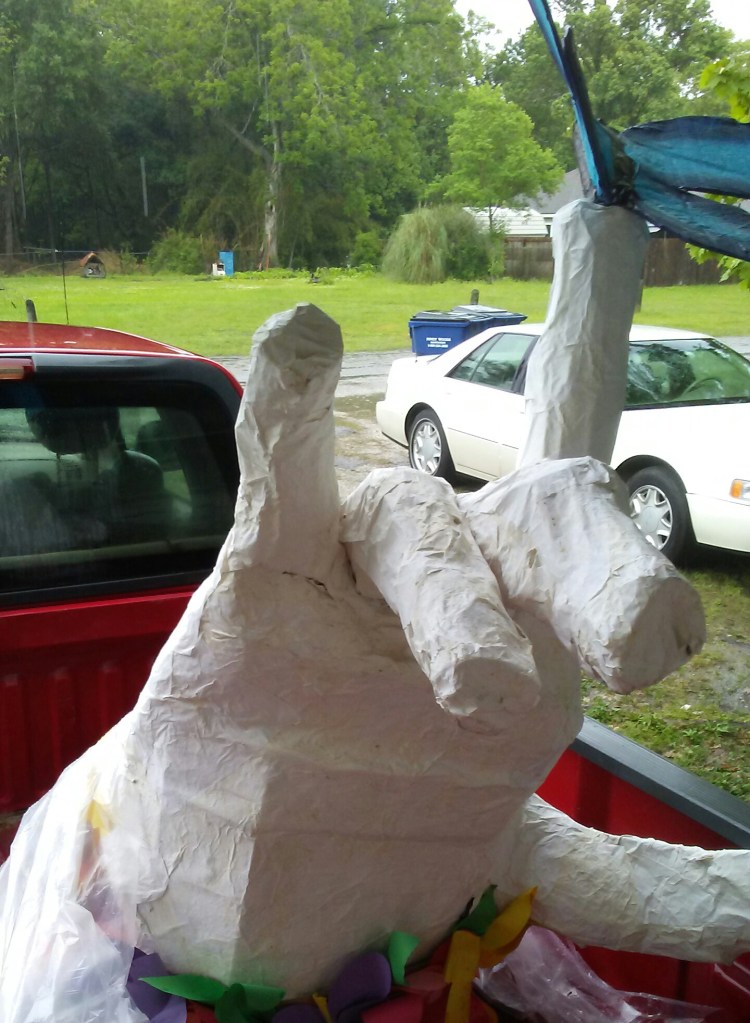 Courtesy art The hand that will be burned at 6 p.m. today

April is National Sexual Assault Awareness month, and today at 6 p.m., in honor of victims of sexual violence, survivors and their families, the first annual Hands of Hope ceremony will be held at Tyrrell Park where a large papier-mâché hand will be burned as a symbol of hope.
This year’s national theme for the month is Engaging new voices, but the event’s theme is Hands of Hope.
“Hands can hurt, but they can also heal,” Darla Daigle, an education specialist at Rape and Suicide Crisis of Southeast Texas, Inc. said.
The burning of the hand is a symbol of survivorship, Daigle said, because your life is never going to be like it was before.
“It will be ashes surviving, but it will never be a beautiful hand with a butterfly again,” Daigle said.
Daigle said that social change is what is necessary for people to change the way they think and speak about sexual violence, and each opportunity to make the public aware of what is happening is an opportunity for change.
The voice of hope at the event will be Port Arthur Mayor Derrick Freeman, and the face of hope will be survivor, Jean Uphold.
The hand was created by artist Ashlei Dodd specifically for the ceremony, which is designed to promote healing and strength.
“I hope it is what the survivors of abuse would see as hope,” Dodd, artist said.
Dodd was commissioned for the work and said it was unique in that it had to be completely combustible.
“Because of the unique nature of papier-mâché, you usually get something metal or something that’s going to be durable to support it in the middle because you’re not planning on burning it,” Dodd said. “It’s made out of cardboard boxes. There is papered scotch tape. There is duct tape for the places that needed extra support. And then, it is newspaper and white copy machine paper.”
Dodd used the white copy paper because she thought a white background would be easy for participants to write their messages on.
“The theme for the event is hands of hope, and it’s already spring, which is a season of rebirth,” Dodd said. “So, I did flowers and I did a butterfly.”
The hand is surrounded in flowers at the base where the wrist is and Dodd made a support system so that the fingers are reaching up and reaching for a butterfly.
Dodd is not just an artist, but she is also involved with teaching art to children who have been through sexual abuse.
Daigle said that here will be supplies available at the event for participants to write messages on the giant hand of hope.
Both Dodd and Daigle will be at the event.
“I will be happy if there is a large turn out,” Daigle said.
The public is invited and encouraged to participate in this free event. For more information or assistance, call Darla Daigle at 409-832-6530.