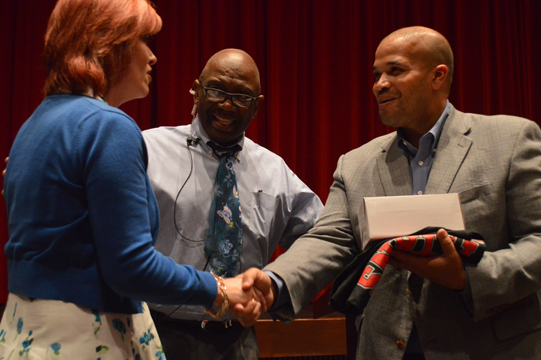 PA mayor urges MHS teens to give back to Port Arthur

Some lucky students got to get out of class, get a free lunch and listen to a speech about their possibilities given by the mayor.

AVID stands for Advancement Via Individual Determination, and helps prepare students for success in higher education, including college and future careers.

Freeman greeted the audience of nearly 30 students in attendance, along with faculty, before telling a little about himself.

Born and raised in Port Arthur, Freeman graduated from Thomas Jefferson in 1994 and returned to Port Arthur after college in ’98 before taking a job in Los Angeles for radio the following year.

“I thought I had made it,” Freeman said. “I left for Los Angeles and stayed there for the next 10 years.”

However, as he told the students gathered in the Memorial auditorium, Freeman felt he had only achieved “minimal success” there and that he was “treading water.”

“I never felt comfortable in Los Angeles,” Freeman said. “I was paying $2,200 a month for a (very small) apartment.”

After his wife became pregnant, they moved back to Port Arthur.

“I had it in mind once I left Port Arthur I was never coming back; but, it was not happening in Los Angeles. So, we came back home in 2009.”

Freeman noted the less-than-ideal condition of the city as he perceived it when he came back.

“I looked at Port Arthur and asked, ‘Why does my city look like this?’”

Freeman said he wanted to change the city for the better — and to do that, he had to get into politics.

“If you want to make changes, you have to get involved,” he said. “I majored in political science… and I loved politics.”

Freeman ran for Port Arthur City Council in 2010 and was elected to the council the next five years.

“It was like having an assistant coach job under (Mayor Deloris) Prince,” Freeman said. “We started getting things done in Port Arthur.”

After recounting some of his personal history, Freeman addressed the students with what would quickly become the centerpiece of his speech: “Don’t be me; be better than me.”

“I used to tell my little brother, ‘I want you to do better than me,’” Freeman said. “I’m a firm believer in Christ and in the belief the more you give, the more you receive.”

The mayor joked, though, about how charity work and blessings didn’t pay the bills in Los Angeles.

“But it was a motto I chose to live by — that there’s nothing better than giving.”

In talking about the capacity to give, Freeman said, “In Port Arthur, there’s no job with a greater capacity than being mayor. The more people I can help, the more God can expand my capacity to help people.”

“It took two years for people in Southeast Texas to learn about it,” Freeman said. “A lot of people don’t know what to do because they don’t have the knowledge.

Freeman equated ignorance to “slavery of the mind.” He also said that people who leave Port Arthur tend to do big things because of the chip on the shoulder they have about being in Port Arthur.

He returned his focus to homegrown talent, however.

“When I was talking with (rapper) Bun B, I was telling him that it’s not about who’s making it out of Port Arthur, but who’s coming back in.”

Freeman cited a person’s inheritance as something innately tied to where they grew up.

In the spirit of cultivating one’s hometown, Freeman went back to his office as a public servant.

Freeman listed examples of students becoming CEOs of Fortune 500 companies, curing cancer and becoming sports stars as some of the ambitious possibilities open to them if they apply themselves and become knowledgeable.

“People out there depend on you to bring that knowledge,” he said.

In a question and answer session with the students, Freeman answered such questions as what the biggest challenge of being mayor was and how he effectively managed his time.

“The biggest one is not knocking someone out,” he said, when talking about challenges. “People cross the line in politics all the time.”

Freeman added that in order to be successful in politics, one could not be dragged down by negativity.

A portion of Procter Street was been transformed into a midway where excited children raced to various carnival rides as... read more