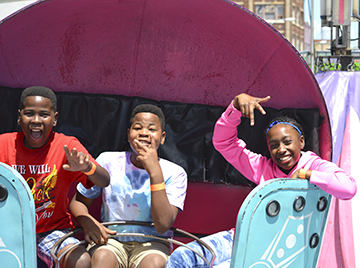 Calvin Morris, Broderick Morris and Aleyiah Guidry spin round on the Tilt-A-Whirl during SpringFest on Saturday. Mary Meaux/The News

A portion of Procter Street was been transformed into a midway where excited children raced to various carnival rides as the scent of barbecue floated on the air.

Underneath the pavilion the gospel group Salt of the Earth belted out the song “Jesus Can Work It Out” as several people got up and began taking cell phone recordings and moving to the music. 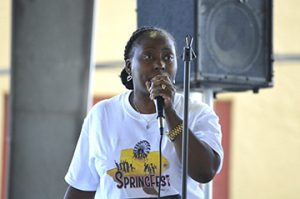 A member of Salt of the Earth gospel group performs “Jesus Can Work It Out” during SpringFest on Saturday.
Mary Meaux/The News

The celebratory event marked day two of SpringFest. The first-ever, three-day festival is sponsored by the city of Port Arthur and The Recreational Event Activity Team. 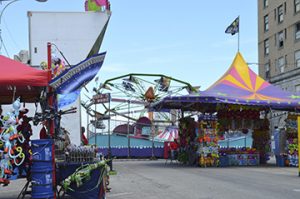 The midway set up near the pavilion on Procter Street for SpringFest.
Mary Meaux/The News

Debra Welch, an organizer of the event with TREAT, knew that Easter weekend was filled with many other community events. She also knew that when the other events were over with that the crowd at SpringFest would grow.

“We are trying to start something for Port Arthur,” Welch said. “People say there’s nothing to do in Port Arthur.”

The festival features a number of thrill rides such as Tilt-A-Whirl, Supershot (a drop ride) and Cliff Hanger as well as U Toob and Fun Zone fun houses, a bounce house, several small children’s rides and games of skill and luck.

Over at the Tilt-A-Whirl, brothers Broderick and Calvin Morris took a spin with friend Aleyiah Guidry. The trio made sure to pose for photos as the ride spun round and round. 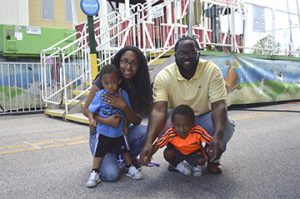 Bobbi and Trenton Scott with their twins, Trenton and Titus Scott, of Port Arthur, stop for a photo before getting on carnival rides during SpringFest on Saturday.
Mary Meaux/The News

Over at the kiddie rides Trenton and Bobbie Scott were walking with twins, Titus and Trenton Scott.

Mom Bobbie Scott said she didn’t know about the event until her husband told her he had heard about it at a Rotary club meeting. While the family enjoyed the festival, they also hope that next time there is more publicity to make the public aware.

Besides rides, games and music there are also vendors at the event.

There is no admission fee to get into SpringFest.

Kennedy Sanders consistently excels on both the track field and in the classroom at Memorial High School. A senior, Sanders... read more