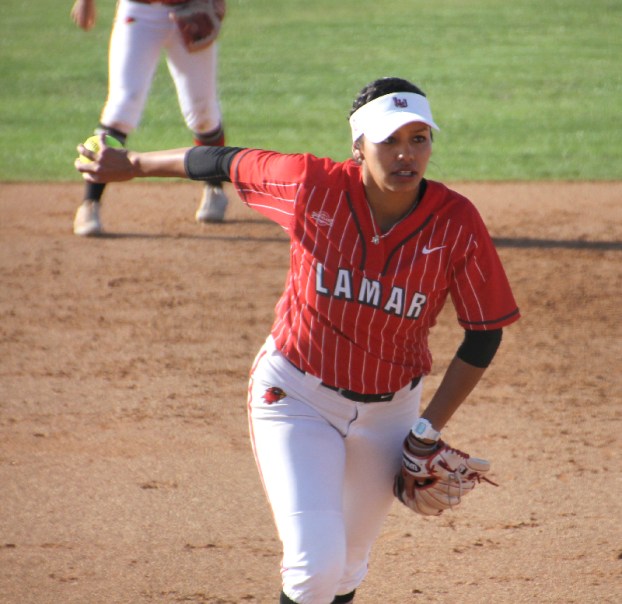 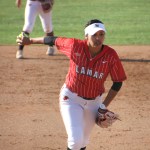 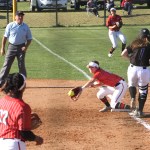 BEAUMONT – Ciara Luna pitched a one-hitter in the opening game and pitched two innings of hitless relief to get the win in the nightcap as the Lamar Cardinals swept a Southland Conference softball doubleheader from the visiting Central Arkansas Bears by scores of 2-0 and 5-4 on Friday.

“Ciara was fantastic,” LU coach Holly Bruder said. “That’s what you expect from the conference pitcher of the week.”

Luna (9-12) had a no-hitter for the first four innings of the opener before Central Arkansas’ Kate Myers led off the fifth inning with a sharp single up the middle. That was about all the offense Central Arkansas could muster up against the senior right-hander, who walked one and struck out three.

The Cardinals had just one hit of their own against Central Arkansas’ Kayla Gomness, but took advantage of three UCA errors to score two unearned runs. LU took advantage of an error in the first inning as Sable Hankins reached on an infield error that moved Brittany Rodriguez to third with two outs. Hankins and Rodriguez then pulled off a double steal to give the Cards a 1-0 lead.

The Cardinals took advantage of another Central Arkansas error in the third as Ashley McDowell doubled to right-center and raced home on a throwing error.

“Both pitchers did a great job in the first game,” Bruder said. “We got a big hit and that made the difference.”

Sable Hankins’ walk-off single in the bottom of the seventh scored McDowell with the winning run as the Cardinals bounced back from deficits of 2-0 and 4-3 to complete the sweep.

Central Arkansas (16-29 overall, 6-11 Southland) scored twice in the first off LU starter Laura Napoli thanks to a two-run double by Cylla Hill, but the Cardinals (22-20, 12-5 Southland) once again took advantage of UCA errors, as a pair of miscues led to two unearned runs.

The Cardinals took a 3-2 lead in the third when Hankins doubled home Brynn Baca, but the Bears took a 4-3 lead in the top of the fifth as Ryan Holdiness ripped an RBI triple before scoring on a sacrifice fly.

The Cardinals got the run back in the bottom of the inning as McDowell scored on a dropped infield pop.

That set the stage for the seventh inning. McDowell was hit by a pitch before Rodriguez put down an infield single to put runners on first and second with no outs. Baca advanced the runners to second and third before Hankins ripped one to the gap in left center to easily score McDowell. It was the 24th walk-off win for the Cardinals since reviving the program in 2013, and the third walk-off RBI for Hankins.

“We made some mistakes, but we got the timely hit when we needed it,” Bruder said. “It always feels good to sweep.”

Napoli allowed five hits and four runs, three earned in four-plus innings. Anissa Rodriguez pitched one hitless inning of relief before Luna came on for the final two innings, getting out of a jam in the top of the seventh after UCA put two runners on base with two outs thanks to a pair of LU errors.

“We made some mistakes, that might have cost us. The kids know that,” Bruder said. “Fortunately, it didn’t cost us today.”

The Cardinals and Bears wrap up their series at 2 p.m. Saturday at the LU Softball Complex. There will be a postgame Easter Egg hunt for youth in attendance. Those who wish to participate in the hunt should bring their own basket.