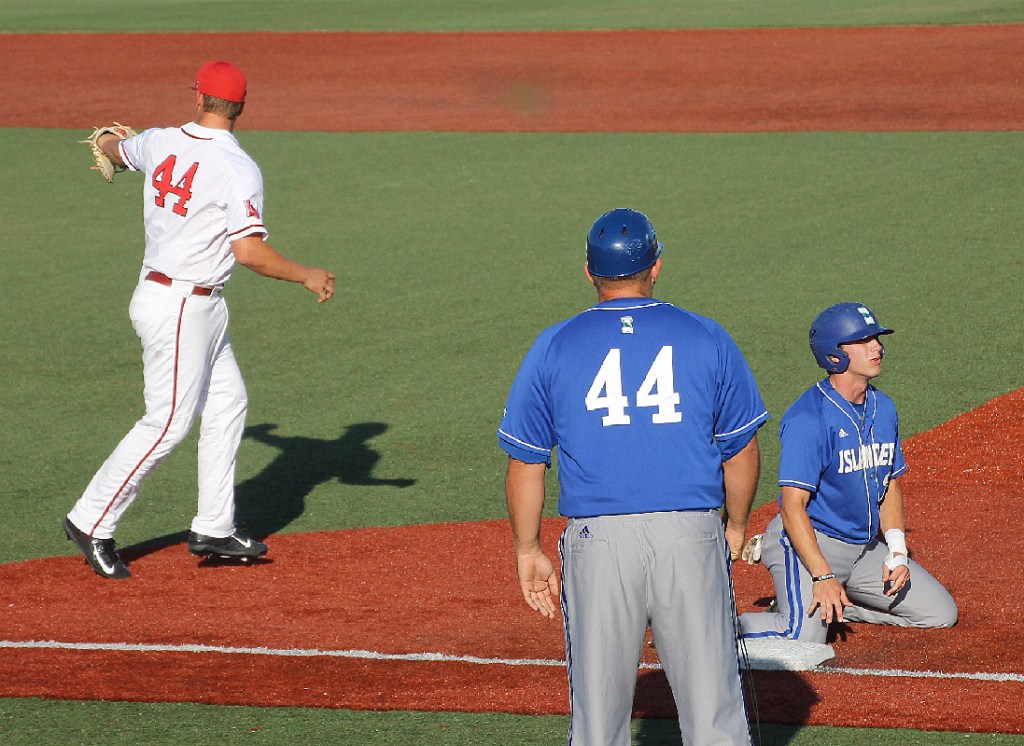 BEAUMONT – Lamar’s baseball team capitalized on mistakes and used them for a huge eight-run fourth inning that surged the Cardinals to a 8-2 win over Texas A&M-Corpus Christi Friday night at Vincent-Beck Stadium in Southland Conference action. The victory clinched the league series for LU.

Down 1-0 at the start of the frame and fresh off of a momentum swinging catch at second from Cole Coker, the fourth inning started when Trey Silvers was plunked by a pitch to put a leadoff runner at first base. That was the first of six free passes that the Cardinals drew in the inning, five of them scored. Coker followed Silvers with a single through the left side. Catcher Bryndan Arredondo squared around to bunt, but was hit in the back of the leg on the throw to get him first base.

With the bases loaded, Phil Ingram drew a walk, Grant DeVore singled to left field, Cutter McDowell was plunked and Reid Russell all reached and drove in a run. Robin Adames bounced into a fielder’s choice at second base, which cut down Russell and sent home DeVore. Chad Fleischman drew a walk to load the bases again for Trey Silvers, who drew a walk for his second free pass of the inning.

In the half-inning before, the Islanders had the bases loaded when Lukas Hermanson hit a screamer back up the middle, but LU’s freshman Coker made a leaping grab that kept Corpus off the board again.

Jimmy Johnson (3-4) started on the mound and tossed five innings with just one run allowed on five hits and three walks. The Islanders put good at-bats together in the third and fourth innings, which drove his pitch count up.  The Palestine native finished the game with five strikeouts, and had three-in-a-row between the second and third innings.

He was relived in the sixth by Ryan Cawthon, who was just short of his longest outing of the 2017 campaign. The senior worked three innings with four hits and two walks allowed. A double factored into his lone run given up as well. Jackson Owens popped a two-bagger and Nick Anderson chased him home with a poked-single into left field.

Tanner Driskill took over in the ninth and gave up only one walk and struck out another.

The Cardinals were outhit, 9-7, and it’s the first time this season LU has claimed a win when the opponent had more base knocks. Coker and Silvers each were 2 for 3 in the game, and each scored a run and drove in a run. McDowell was 2-for-4 with two doubles, a run and RBI. Despite reaching all five times up, Russell didn’t record an at-bat in the game. He took three walks and was hit twice.

As a unit, the offense drew nine total walks and was hit by a pitch four times. Fleischman and Ingram each recorded two walks.

Cole Carter (3-5) took the loss on three innings of work.