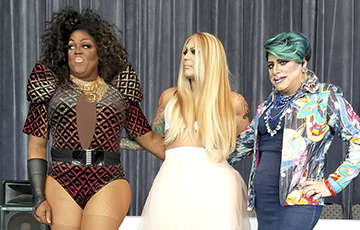 Drag Queens Jessi James, Ashley Davenport and Olivia Gardner pose for the audience after their show at Thursday's LGBTQIA Summit. 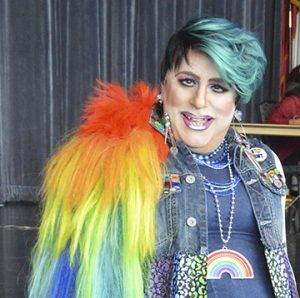 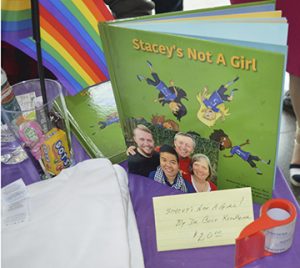 “Stacy’s Not A Girl!” by Colt-Keo-Meier, son of Dr. Robert Meier, former president and current secretary of PFLAG Beaumont.

Larneka Lavalais of the group Samaritan was one of the guest speakers who spoke about domestic violence.

The goal of the conference was to educate people and to show support for the LGBTQIA community.

“We want to put our faces out in the community because when people think of Samaritan—we are spiritually based— it may seem like we’re exclusive, but we want people to know that you are welcome everybody is welcome,” Lavalais, therapist at Samaritan counseling Center in Port Arthur, said. “We are open to everyone.”

PFLAG Beaumont (Parents and Families and Friends of Lesbians and Gays) was one of over 14 vendors that had information booths set up at the event. PFLAG member and volunteer Jolee Tanner said that she wanted to be there because the pathways talk is very educational.

“I got involved in PFLAG Beaumont because I am a transgender man and I needed a source of support,” Nathan Roan said. “So, I got ahold of some other people and PFLAG was the only support group in the area and it all just piggy-backed on that. Now anytime there’s any advocacy work or any outreach stuff we try to have our faces out there so people know that we’re here.”

Vendors and guest speakers, who ranged from health professionals to transgender individuals, educated attendees on disparities and adversities faced by the LGBTQ community, especially in health related issues.

uninsured, but the under-insured.

The luncheon was an open forum where attendees could ask sensitive questions of the speakers in a safe environment. Speakers included members of the LGBTQIA community as well as those in the healthcare and support professions. Speakers shared their experiences and covered topics that dealt with their experiences.

“When I was a kid, people called me a sissy and a nancy-boy, but when I became a woman, people said, ‘You’re a man,’ so …,” Olivia Gardner, performer and speaker, said.

Lunch was followed by a drag show. The performers were Ashley Davenport, Jessie James and Olivia Gardner.

Gardner, a longtime and well-known performer danced to “Firework” by Katie Perry.

After the drag show, Larneka Lavalais, a licensed professional counselor with Samaritan Counseling Center, spoke about support being necessary and available in the community.

Wilson said she was pleased that there was such a large and diverse turnout.

PORT NECHES — Tom Wilmore often finds it difficult to talk about World War II and his time aboard the... read more