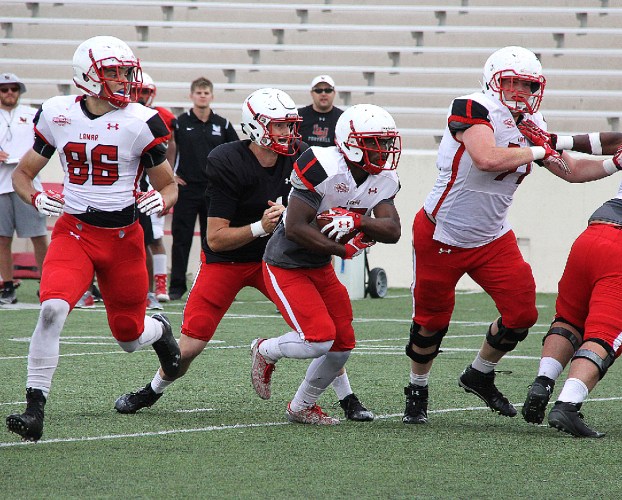 James White of Lamar takes a handoff from quarterback Blake McKenzie and scans for yardage Friday during the Red-White scrimmage in Beaumont. (Lamar sports information)

BEAUMONT – The first spring camp and Red and White game under new Lamar head football coach Mike Schultz is in the books as the Cardinals took to the field at Provost Umphrey Stadium Friday morning. The scrimmage was originally scheduled to be played Saturday but had to be moved due to the threat of storms in the area.

“We accomplished today what we wanted,” said Schultz. “We got a certain number of snaps with our ones and a certain number with our twos. We’re not where we want to be and we have a long way to go, but we are taking steps in the right direction.”

Fans got their first glimpse of the new look Cardinals, and they were witness to an up-tempo offense and a defense that was flying to the football. All three LU quarterbacks saw significant time behind center, while several different running backs got their opportunity in the spotlight.

The LU quarterbacks proved their elusiveness running the football led by Morse. The rising sophomore carried the ball twice for 40 yards, while Allen had four carries for 10 yards.

The highlight of the ground game – which recorded the Cardinals’ two scores – came from Texas A&M transfer James White. The 6-foot, 220-pound White showed off his ability to pick up tough yards in traffic carrying the ball five times for 49 yards (9.8 per carry), including a 9-yard rush for a touchdown on his last carry.

“James is a hard runner,” said Schultz. “I think he will have a significant role. There are certain things that he does really well and we are going to try and put him in those situations and let him go.”

The Cardinals’ other touchdown came on a 1-yard carry from redshirt freshman Markell Hawthorne. The Iowa, La., native finished the game with four carries for 23 yards.

Even with the offensive highlights, the LU defense may have walked away with the upper hand Friday. The defense picked off two passes and forced three fumbles and kept the offense off the scoreboard until late in the scrimmage.

In addition to the turnovers, the defense also did a good job of penetrating into the backfield as well as batting away passes. The defense was credited with numerous stops behind the line of scrimmage, including two sacks. The defense also batted away three passes during the early stages of the scrimmage.

Welcome back to the Southland Conference, Savana Guidry. The recent NJCAA Player of the Week for Lamar State College... read more