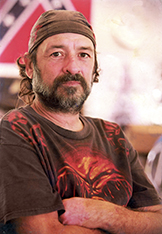 Bryan was known as a master motorcycle mechanic. He enjoyed flying his drones, cooking Bar-B-Que, and crawfish.

Survivors include his son, Ryan Kasper and his wife, Heather, of Port Arthur; wife of seventeen years, Kim Vincent; step-daughter, Hillary Newton; and step-son, Cody Wallace, all of Port Arthur; grandchildren, Roland Kasper and Makayla Mattson, and several step-grandchildren; adopted sister and brother-in-law, Candy and Jimmy Allen of Port Acres; numerous cousins and a host of other relatives and friends. He will be especially missed by his faithful chihuahua, Lil Bit, aka Buttons.