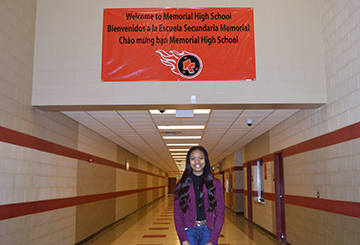 Kennedy Sanders consistently excels on both the track field and in the classroom at Memorial High School.

A senior, Sanders divides her time between academics, work in a vocational office education program, sports and church while taking on dual credit courses.

“I do a lot of homework,” Sanders said.

She has her eye on Prairie View A&M where she plans to major in nursing.

“I like to help people,” she said. “And in the nursing field you can really help others.”

Once established in a nursing career, she plans to go back to school to become a nurse practitioner and work in pediatrics.

Sanders said she’s not looking to participate in collegiate track although she excels at it on the high school level. Instead she plans to focus on her academics.

“You really have to be focused on your school work and your track because you have to balance both at the same time,” she said.

A member of the National Honor Society, Sanders is also a member of Ivy League, which is a little sister organization to Alpha Kappa Alpha.

In addition, she’s a member of Being Our Moral Best, or BOMB, at Mount Sinai Missionary Baptist Church.

“It helps kids be true to their self and help others to not just think of themselves,” she said. “To be the best they can be.”

Her hard work and dedication have not gone unnoticed. Her English teacher, Marrissia Jones, has had her in the classroom or two years.

“Kennedy carries the title of a model student with poise, diligence and integrity. She is also a VOE worker and within that position she wears many hats demonstrating her leadership skills, confidence and intellect,” Jones said. “Kennedy not only flourishes academically as a gifted and talented student she has also demonstrated her innate leadership throughout her co-enrollment classes and her extracurricular activities. I have witnessed her selfless acts of kindness to students, words of encouragement uplifting anyone discouraged. Her spirit and smile has the potential to uplift anyone experiencing a bad day.”

Sanders said she loves to talk to people and make others smile.

“Any one that knows me knows that when I walk in the room there will be smiles and laughter,” Sanders said.

“Nothing fuels the soul like laughter and if you know Kennedy, you would know that she enjoys cracking a good joke and laughing with her close friends,” Jones said. “She is a well rounded, beautiful young lady that will be successful no mater what path she chooses.”

Kennedy Sanders is the daughter of Kimberly Sanders and Charles Sanders.