An egg-cellent day for a hunt 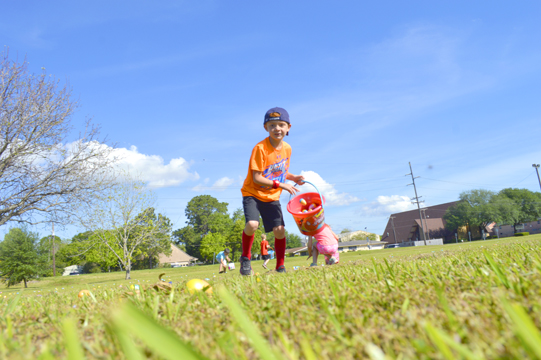 Children run as fast as they can in order to pick up the hundreds of colorful eggs scattered about West Groves Park. (Lorenzo Salinas/The News)

A beautiful day broke over Groves as young children ran to and fro under the bright morning sun to collect eggs as quick as they could in the park.

The Groves Chamber of Commerce and Tourist Center held its 24th Annual Easter Egg Hunt at West Groves Park near the Groves Public Library. 3,000 eggs were distributed across the park, with three areas designated for three different age groups: 6 through 7, 4 through 5 and those tykes under 3 years of age.

“We distribute exactly the same amount of eggs on each side because we want everybody to have a chance,” Ronnie Boneau, director of the Chamber, said of the 4-5 and 6-7 side of the park.

1,250 eggs were distributed on those sides while 500 eggs were placed in the under age-3 area. Each of the eggs contained small toys.

And, judging by the speed with which the kids gathered up the eggs and put them in their baskets, those eggs did not remain untouched for long.

“They do it fast. It’s always been that way,” Boneau said. 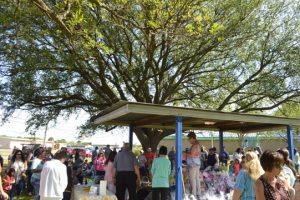 Families gather around the pavilion near the Groves Library to hear the announcements for raffle ticket winners. (Lorenzo Salinas/The News)

According to him, Chamber members placed the colorful eggs around the park from 8 to 9:30 in the morning; yet, it only took five minutes for the kids to pick up those 3,000 eggs.

“There’s almost 100 kids who come,” Boneau said of the attendance.

He explained that after the egg hunt, families go to the pavilion for refreshments like cookies and punch. In addition, children are given raffle tickets for the chance to win prizes like Easter baskets and stuffed animals.

“The prizes are donated by chamber member businesses, as well as individuals,” Boneau said.

The Easter Bunny was on hand, as well, sitting down and taking photos with the children.

“You know the amazing thing?” Boneau asked. “It starts at 10, takes five minutes to do (the egg hunt) and then they go to the pavilion. By noon, there won’t be a person out here.

“So, we say even if you don’t have much time, come out here. It doesn’t take long.”

Stephanja Ahumada came with her three boys and one girl. This was their second year to attend the event.

“I think it’s great for the community,” Ahumada, a Groves native, said. “It’s nice to meet other people from the community.”

Ahumada said that events like these made Groves feel more tight-knit and more family-oriented.

“These kinds of things add to that feeling,” she said.

Caleb Broussard accompanied his daughter for their first time to the egg hunt.

“I learned about it through the library,” Broussard said, before commenting that it was bigger than he expected.

“It’s nice that they’re actually doing something for the kids.” 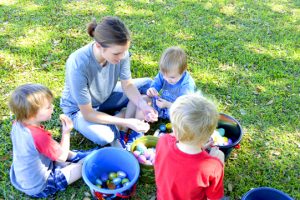 Katie Irvin opens Easter eggs with three of her children underneath a shady spot near the Groves Library. (Lorenzo Salinas/The News)

Katie Irvin, her husband and their four children were seated in the shade of a large tree. It was their third year to attend the Groves event.

“It’s the community coming together,” Irvin said. “It’s got that smalltime, hometown feel that you can’t get in the big city.”

Boneau called the egg hunt “one of the fastest, simplest and best Chamber events” that they host.

“Everyone comes here for fun,” he said.