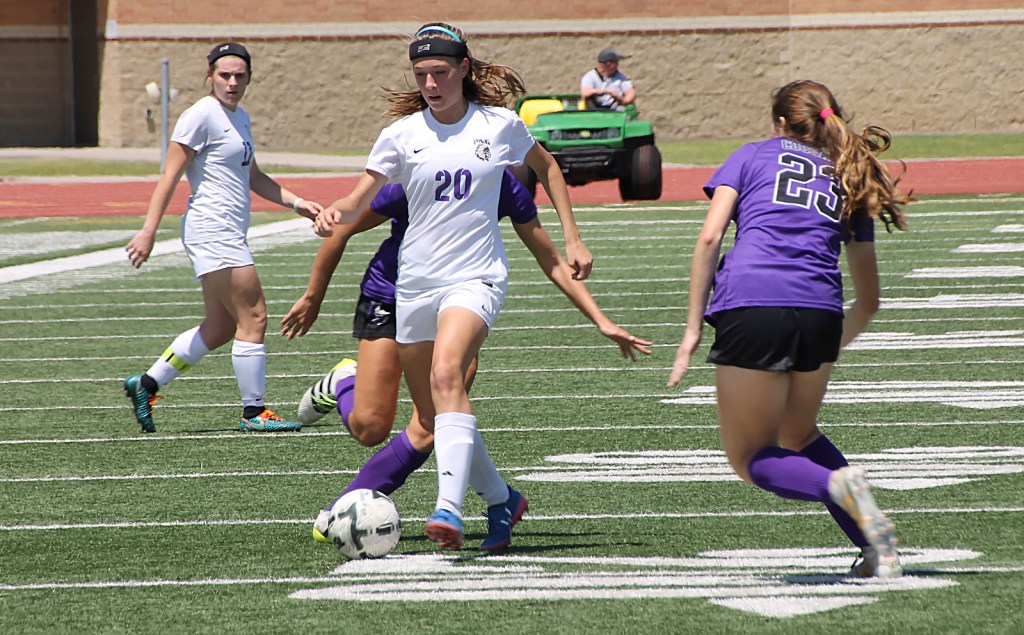 Grace Seymour of PNG pushes the ball against heavy pressure from Sophie Bullard (23) and College Station on Friday in Humble. (I.C. Murrell/The News)

HUMBLE — If any of Aimee Bates’ last three Port Neches-Groves soccer teams was going to make it to the state playoffs, she believed this was the one.

“It’s probably the hardest loss because this was our best chance getting into state,” she said Friday, after College Station eliminated PNG from the 5A Region III playoffs for the third time in four years, 2-0. “This was our best attack.”

This was PNG’s third straight appearance in the regional semifinal. A&M Consolidated knocked out the Indians a year ago.

Once again, the College Station area prevailed, handing PNG its first regulation defeat. The Indians had 22 wins, a non-district tie and two shootout defeats this season.

“College Station is a good team,” Bates said. “We lost to a great team. We’d love to play them again. Things were going well for them today and not for PNG today.”

Jillian Flores nearly opened the scoring for PNG at the 24:51 mark of the first half when her shot from the right-hand side was just batted away by College Station’s goaltender, but the Cougars got to inbound the ball instead of the Indians taking a corner kick, drawing ire from the Indian faithful.

“I was not happy with the referees with not getting the corner kick,” Bates said. “There was also a handball in the box that wasn’t called. Those were two huge no-calls. That would have been a PK and we’d have gone into the half 1-1.”

The handball occurred after College Station (16-6-3) scored from just outside the box with 12:29 left before halftime.

The second goal came with about 3 minutes left in the game. Bates said it was frustrating for the Indians to not connect the way they wanted to.

“I was proud of the effort, but I don’t think we played to our fullest potential,” Bates said. “This was the third year in a row to be the farthest PNG has gone, which is in the regional semifinal. It’s a celebration to be in there.”