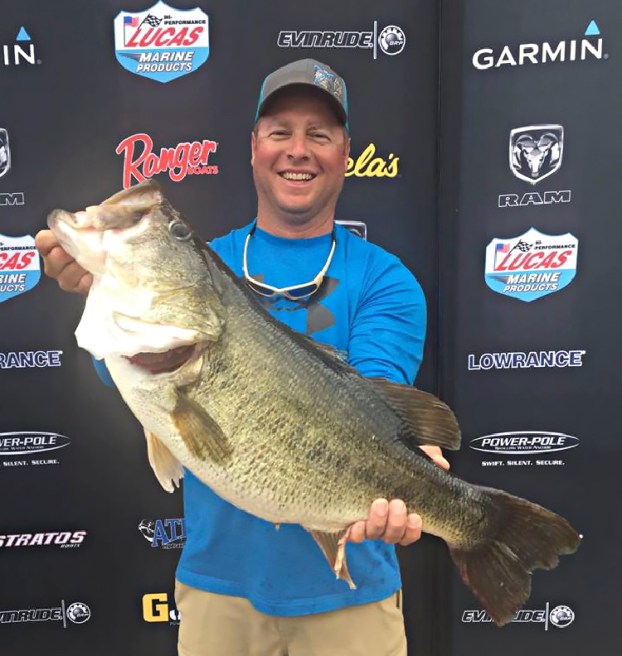 ATHENS – On April 1, angler Kurt Luker of Cleveland set a water body record for a largemouth bass at Belton Lake with a 13.97 pound fish caught during the Texas Team Trail tournament.

Not only is this the largest largemouth bass ever submitted for a record from the lake, it’s also the first ever entry from the lake in the Toyota ShareLunker Program, which encourages anglers who have caught 13-pound-plus largemouth bass between Oct. 1 and April 30 to lend the fish to the Texas Parks and Wildlife Department for data collection and spawning purposes.

Belton Lake now joins the list of 68 other Texas public water bodies that have produced a ShareLunker. Having worked in Waco for 18 years, TPWD inland fisheries district supervisor John Tibbs may know the area fisheries better than anyone – and even he is impressed with this catch.

“Belton Lake is the best smallmouth bass fishery in Central Texas – nothing else even comes close,” Tibbs said. “But it’s not typically known as a big bass lake or a trophy lake like Lake Fork. So it’s impressive and somewhat unusual to see a fish of this quality come out of there.”

While Belton Lake was stocked with largemouth bass fingerlings in 2016, before that it hadn’t been stocked since 1995. Tibbs attributes the growth of the self-sustaining population of largemouth bass to Belton Lake’s high resistance to habitat impairment in years of drought as well as recent years of heavy rainfall, which contributes to “good water, lots of forage and lots of habitat.”

“We had a huge amount of water in 2007 – it reached 630 feet and sustained that from June to the end of summer,” Tibbs said. “So that year we had a tremendous amount of habitat improvement, we probably had a great spawn and we had a fantastic amount of prey. That fish may have gotten a really good jump-start on growth, and if that’s the case there may be some others out there.”

While it remains to be seen if there are any other “lunkers” in Belton Lake, it can be confirmed that there is at least one swimming around at the moment. Luker released the fish, now called ShareLunker 570, back into the lake after TPWD biologists verified the catch and took a fin clip for genetic analysis.

If she had been caught one day earlier, the bass would have been collected and attempted to spawn at the Texas Freshwater Fisheries Center in Athens. But starting this season, entries caught after March 31 are not taken as brood stock for spawning.

Anglers have until April 30 to submit 13 pound or larger largemouth bass into the program for certified weight, DNA sample and immediate release – and those hoping to catch a “needle-in-a-haystack” trophy fish may not have to look any further than the lakes in their hometown.

“Any lake could have a ShareLunker,” Tibbs said. “If Belton Lake is any indication you don’t have to go to Lake Fork for a 13 pound bass – you can still catch one just about anywhere you go.”

The Toyota ShareLunker Program is made possible by funds provided by Gulf States Toyota and the Texas Parks & Wildlife Foundation. Toyota is a longtime supporter of the Foundation and Texas Parks and Wildlife Department, providing major funding for a wide variety of education, fish, parks and wildlife projects.