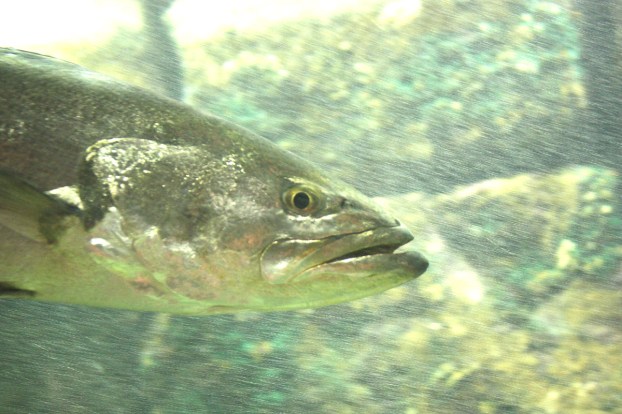 Speckled trout are abundant and grow big in Southeast Texas. (Chester Moore Jr./Special to The News)

MOORE OUTDOORS: Big trout are on the move, so you should be too

Big trout are on the move.

We are entering the time of year when some of the most widespread big speckled trout action happens in the Southeast Texas and Southwest Louisiana. Winter and early spring can produce giants but there are more quality fish caught throughout the system in April and May.

May in particular tends to be amazing on nearby Lake Calcasieu, while I would say April is better on Sabine Lake.

The following are some tips on places to find big trout from here through early summer. And the good news is most of these spots will get better as the month wears on so there is plenty of time to plan a trip.

Many anglers would be shocked to find out how many big trout can be caught on topwaters at the jetties a half-hour before sunrise to about half an hour after.

Topwaters and the jetties might seem like a strange combo but the big girls will feed close to the surface early in the morning on both the Texas and Louisiana rocks. Throughout spring and early summer the jetties are a key area for big trout.

Live bait is a controversial way to pursue big trout but it is perfectly legal and popular here in the Sabine area. Live croaker is the ticket for big trout on the Lower Coast but is not very effective in Sabine Lake. Mullet is a much more big trout attracting bait in the lake itself. Offshore at the short rigs however croaker can be effective. I have no idea why this is so but it has been this way for years.

There are small schools of monster trout that will cruise the shorelines along the Louisiana shoreline. These big fish will be in groups of a few to a perhaps a dozen or more. I am not talking about six 30-inchers hanging out together although it is possible but I have personally seen numerous schools of trout 20 inches plus.

Look for these on the south end of the ecosystem from Madame Johnson Bayou south to Blue Buck Point.

There is a system of channels dug in the bayous along the southern half of the Louisiana shoreline of Sabine Lake. These areas can hold huge trout and some of these areas are likely to hold a little more salinity than some of the popular trout haunts like Blacks Bayou on the north end of the system.

Go in quietly with a good pair of polarized shades, look for concentrations of mullet and even the big trout themselves. Bring slow-sinking plastics or big topwaters to score.

The remaining nearshore oil and gas platforms out of Sabine Pass can hold impressive trout. The key is water clarity. If the water is sandy green or clear you have a good shot. Forget about it if the water is murky.

If you get bit, remember the exact spot. These trout tend to hold on one or two key points rather than around the entire structure.

Big trout are unique, mysterious creatures that drive thousands of anglers to spend thousands of dollars on specialized gear. Keep these observations in mind and you will greatly increase your odds of catching one.

A great way to cover water and mimic what big trout are eating this time of year is with swimbaits.

Swimbaits are essentially soft plastic crankbaits that allow anglers to cover lots of water and fish with a simple retrieve to target big fish. Most major tackle companies have some sort of swimbait on the market now ranging from the foot-long $40 trout mimicking Castaic Lures to much more affordable fare.

“Swimbaits have been invaluable for me fishing on Lake Falcon,” said 2008 Bassmaster Classic winner Alton Jones.

“They will get big fish when other baits don’t seem to get the job done. I have seen big fish get up and follow a big swimbait when they seemingly get lockjaw in clear water.”

The Jones quote might seem out of place but when both largemouth bass and speckled trout reach a certain size they switch to eating almost exclusively large finish. Numerous anglers have reported similar reactions to using swimbaits for specks by producing big fish when other lures do not.

This could be a product of “newness” as most trout have never seen a swimbait, the aforementioned attribute of water coverage or both.

Calcasieu and to a lesser extent Sabine, has lots of oyster reefs from large natural ones to small and medium-sized manmade reefs (Calcasieu). The reefs on the south end tend to get hot as spring wears on and they all hold big fish.

One of the keys to fishing these reefs is to match the hatch and during spring sand eels are prevalent on the reefs, which is why using eel imitations like Mr. Twister’s Slimy Slug and the Norton Sand Eel can produce.

The most important thing to keep in mind about any of these lures is to fish them on the right size jig head. Fishing with 1/8-ounce jig heads is great for shallow reefs with light currents, but you need something heavier that will get down to the bottom and be able to fight heavy spring currents. I use 1/4-ounce.

Drift with the current and let the lure bounce, bump and crash into the oyster reef. Water conditions during spring usually range from off-colored to murky to just plain nasty so anything that might grab the attention of a trout is worth trying.

Make sure you have enough line out to where you are not vertically fishing. The lure will not be able to work properly that way.

In addition, it is important to keep contact with the lure. Springtime trout are not overly aggressive and they often lightly hit soft plastic lures. Use a super sensitive monofilament or braided line for best results.

When I use this method, I slowly raise and lower my rod tip to give the rig a slight hopping action.

Give these tactics a shot and send us photos of the big trout you catch. We would love to feature them on these pages.

To contact Chester Moore, e-mail him at chester@kingdomzoo.com. You can hear him on “Moore Outdoors” Fridays from 6-7 p.m. on Newstalk AM 560 KLVI or online at www.klvi.com.

One more victory each for Port Neches-Groves and Nederland, and the 5A Region III girls soccer championship will be determined... read more