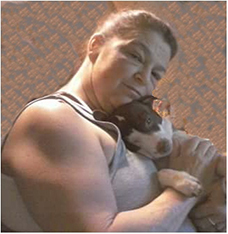 Laura Dana Lynn Anthony, 49, of Port Arthur passed away on Friday, March 31, 2017 at The Medical Center of Southeast Texas.

Laura was born on June 25, 1967 in Newton, Texas to parents Aletha Ann (Woodcock) and John Douglas Roberts. She enjoyed the outdoors; going hiking and going fishing. Laura also enjoyed sewing and doing arts and crafts. Laura was a loving wife, daughter, mother, grandmother and friend who will be missed dearly.

She was preceded in death by her father, John Douglas Roberts.

The family will hold a memorial service; location for the service will be 2143 Birch Street Port Arthur, TX 77640 on Saturday, April 8, 2017 at 1 PM, with a gathering of family and friends from 10 AM until service time. Cremation arrangements were entrusted to Clayton Thompson Funeral Home in Groves.