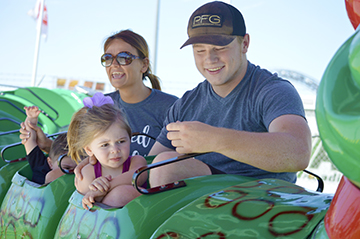 Skilor Fulk tries to calm Brea Avila, 2, as mom Erin Kennedy enjoys herself in the back of an alligator ride on Tuesday afternoon.Kennedy’s family is from Mauriceville, and she has two kids who are ill. Jesse Wright/The News

On Tuesday, hours before the South Texas State Fair was set to open to the public, a couple of families showed up. They were with small children and, improbably, high school baseball players from Hardin-Jefferson, along to pal around with the smaller kids.

These kids were guests through the American Cancer Society and, as fair organizers explained, they wanted to give these kids a special chance to experience the fair.

“It’s something that YMBL can do to help others,” said Pat Riley, the fair’s spokesperson. “These kids may not be able to come out when all the other kids are out here.”

Riley said on Saturday, the fair hit record numbers—the parking lot was packed and there was a line off the freeway exit ramp. Tuesday afternoon, on the other hand, a breeze cooled the spring air and metallic colors glinted. The rides creaked and clacked along—their voices ringing out clear against the mostly empty Kids Zone area. Some of the games were also open and some food vendors were there, just for the kids.

Steve Lyle, a past president of the YMBL fair, said the amusement company, Carnival America, donated the employees for the day and donated the services.

And, of course, there was never a line for anything. 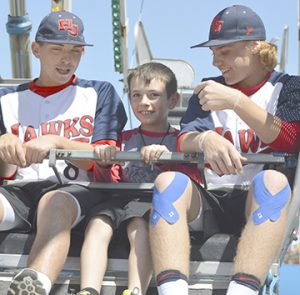 Haggan Avile enjoys the view on the ferris wheel with the baseball players.
Jesse Wright/The News

Haggen Avila, 9, had steered a bumper car and he’d ridden up the ferris wheel with the high school baseball players, and so far he’d not been thrilled. But he said he had bigger fish to fry.

“I want to do one ride in the big section,” he said, referring to the rides for bigger kids and adults. “Probably the roller coaster,” he said. “And I will be scared.”