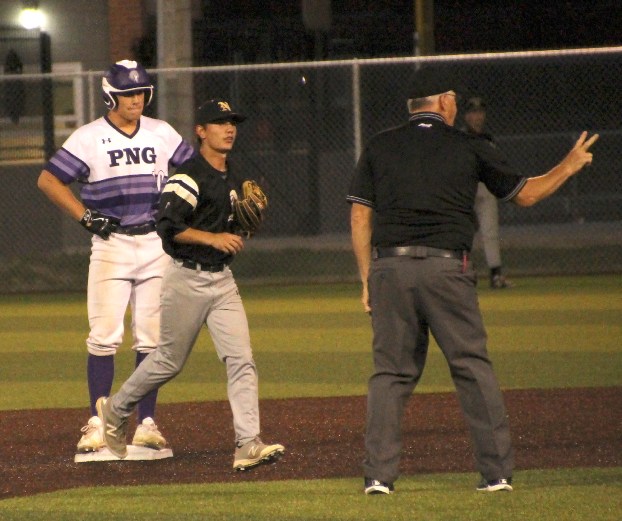 Austin Bost of PNG reaches on a double against Nederland on Friday. (I.C. Murrell/The News)

Struggling to just get on the board after a three-run Chase Kemp home run in the first inning, the Indians did something twice as nice — score six runs in the sixth — and held on for a 6-3 win Friday night over Nederland at a packed Reservation baseball stadium.

Brandon Morse, one of the heroes of Tuesday’s 3-2 win at Nederland, put PNG on the board with a double to score Hayden Guerra. Nathan Vidrine, who earned the save Tuesday, kept the one-out rally going with a triple to plate Austin Bost and Morse and tie the game at 3.

Holden Lane walked and Alec LeBouef was hit by a pitch to fill the bases. Cameron Stansberry scored on a passed ball for the go-ahead run, and Trevor Martin’s RBI single scored Lane. LeBouef added the final run on another passed ball.

Vidrine, the starter Friday, walked Dane Jones to start the seventh, but got Brendan Dunkleberger to ground into a double play. Josh Hranicky came in for the save with two outs and induced a groundout from Kemp on his second pitch.

Vidrine held the Bulldogs to three earned runs on four hits in 89 pitches, striking out two but walking five. Bost hit 3 for 3, while Guerra, Morse, Vidrine and Martin accounted for the rest of the Indians’ seven hits.

Reid Garrett, Kemp, Dunkleberger and Jones each had a hit for Nederland. Kemp, batting in the No. 3 hole, homered after Jones led off the game with a double and Dunkleberger singled.

Nederland’s Braydon Credeur gave up five earned runs on seven hits, walking two and striking out one in 5 1/3 innings. He threw 81 pitches, 61.7 percent of them resulting in strikes.

Connor Kemp tossed a hitless two-thirds in relief, striking out one.

PNG will host Port Arthur Memorial on Tuesday. Nederland will host Ozen then.

PORT NECHES — Who wants to wait seven games for a rematch with a district opponent? Apparently not the baseball... read more