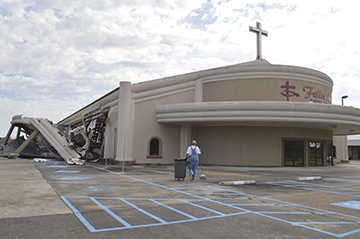 A Nederland church saw the brute force of Wednesday’s storms as churchgoers were in worship in an adjacent building.

Julian Martinez, pastor of music and young family ministries at Fellowship Baptist Church, 1315 S. 27th St., was on hand to survey the damage Thursday morning while he awaited word from debris cleaning crews and insurance representatives. 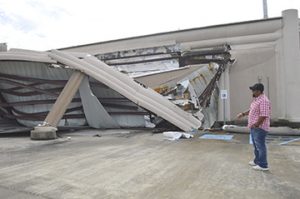 A large awning with steel girders collapsed on one side the church leaving columns bent and the façade crumbled. No one was at this portion of the church at the time and no injuries were reported.

“We were having church next door and someone came in and said that someone had told them the awing fell,” Martinez said. Martinez then went to check. “It was still raining at that time.”

As Martinez spoke, church member Debi Tamez, clad in overalls, picked up stray pieces of Styrofoam and other debris that had blown into the parking lot. As she worked she swept the items up and placed them into a garbage can. 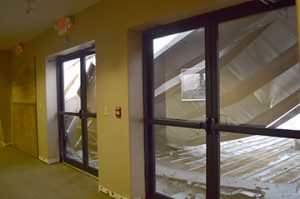 A view of the collapsed awning from inside a hallway at the church. The doors remain intact but a window was blown out during the storm.
Mary Meaux/The News

When the awning fell, it blew out a window, which sent something, Martinez said, into an adjacent wall. Rain poured into the building, flooding hallways and into the main worship area as well. Church members were there during the night pulling up baseboards and cleaning up and fans and dehumidifiers were placed strategically inside.

“We have the other facility (for use) if need be but we will be open Sunday,” he said.

Meteorologist Jared Rackley with the National Weather Service-Lake Çharles said there was a report of 60 mph winds at the Jack Brooks Regional Airport as well as reports of dime to quarter sized hail and rain during the severe weather event.

Rainfall amounts vary with some areas in the southern part of the county getting an inch while the northern portion got between two-and-a-half to four inches of rain.

“We don’t know if there were any tornadoes with this storm, we’re still surveying,” Rackley said.

Street flooding was a problem in many areas of Mid and South Jefferson County. Port Neches Police Department issued an alert, via Facebook, saying the roads that normally flood were impassable and the ones that usually don’t flood were also impassable. PNPD advised motorist to stay off the roads until the high water receded.

Closer to home in Port Arthur, the city said an 18-wheeler on Procter Street slammed into a tree branch, and city workers had to free the stuck truck with a chainsaw.

Even so, across the county the storm seemed to cause no major devastation, as the local Emergency Management office said they had nothing “newsworthy” to report.