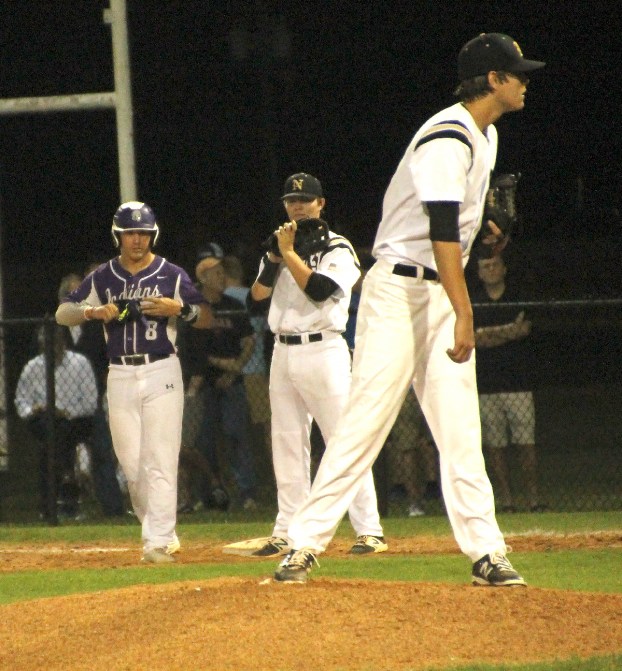 Brendan Dunkleberger of Nederland looks for his pitch sign as Logan LeJeune of PNG gets a lead on first base and Chase Kemp of Nederland plays first Tuesday. (I.C. Murrell/The News)

PORT NECHES — Who wants to wait seven games for a rematch with a district opponent? Apparently not the baseball coaches of District 22-5A.

Port Neches-Groves will go for the season sweep of Nederland on Friday night on its newly remodeled field, three days after taking a 3-2 win at Nederland’s Metreyon-Delahoussaye Field. The rivalry is just a highlight of 22-5A’s new schedule format that sees each team play another twice in one week in a home-and-home series.

“Everyone has enjoyed it, especially with the new pitch count,” Nederland coach Bryan Spell said, referring to the new pitch count limits the UIL approved in October. “You have to pay much more attention to how you’re [handling pitchers]. I know 21-5A and other districts have used it.”

No matter the format, “The best team is going to go home winning each game,” Spell added.

Under the new UIL rule, a pitcher who throws 86 to 110 pitches in a game must rest for four days, so a Tuesday pitcher reaching that limit couldn’t throw the following Friday. Those are the usual nights for district series.

The new format is also an opportunity for coaches to prepare for playoff series, according to PNG’s Scott Carter.

“If you’re a team that has really one good pitcher, you can’t ride that guy in the front half and the back half [of the home-and-home] to throw the same against everybody. You have to have more than one pitcher to try to get through. I think that’s what a lot of people saw,” he said.

Carter didn’t think at first he was “100 percent” in favor of the new format because a player who was hurt early in the season could come back to possibly play against a team he missed the first time.

The old format was similar to the round robin style still used in many other team sports where each team plays every district opponent once in one round and repeats the process while alternating game locations in the second. PNG’s Carter Henry, who is now at the University of Houston, threw in both games against Nederland last year.

Port Arthur Memorial coach Jessie Riojas is in favor of the home-and-home style because he doesn’t have to worry about an opponent again weeks later.

Spell and Riojas said they’ve never been concerned with their pitching depths in a two-game set.

“We’re not as deep as like Port Neches and Nederland, but we have a handful of guys we develop,” Riojas said, noting he rotates five to six pitchers in district play and hasn’t thrown a player more than 80 pitches in a game this season. Keeping a strict limit is a longstanding practice of his.

Said Spell: “I think we have a number of quality arms. It’s nothing we have worried a whole lot about. You have to play who’s on the schedule that night. I’ve enjoyed having the same team that week because you are familiar with the hitters.”

Brandon Morse threw 6 2/3 innings of four-hit ball and made what turned out to be the game-winning single in the seventh inning. The go-ahead run came on a wild pitch during his at-bat.

“He’s given us great outings every tournament,” Scott Carter said. “He’s been pitching in tournaments. We’ve got four guys we rotate in and out as starters. It was his time to go, and he did exactly what he’s been doing, throwing a lot of strikes and his breaking ball working really well and [he] commands the zone.”

Nathan Vidrine, who earned the save in just four pitches, will start against Nederland, who will send Braydon Credeur to the mound.

“The next game is always the most important one for us,” Spell said. “For us to be able to come out on top, we’re going to have to make a few more plays that we didn’t the other night. Both teams did a good job keeping the others off balance at the plate.”

This will be just the third game PNG has played on its new AstroTurf. The remodeling project was estimated at $2 million.

“The kids love it,” Carter said Thursday. “It’s been a great tool as far as getting out here and being able to practice. Southeast Texas, with the weather like it is — I think we got 6 inches of rain [Wednesday] and you wouldn’t know it on our field today.

“It was definitely a necessity as far as drainage is concerned. If it rained like it did [Wednesday], it’d have been two or three days before we could have got back on it.”

Central defeated Memorial 11-5 in Port Arthur on Tuesday, but that result could be overturned.

Riojas protested the outcome to the 22-5A executive committee on grounds that Central’s starter exceeded the maximum pitch count. The starter threw 124 pitches, 10 more than limit.

“Our district policy states that any team or head coach that breaks this rule must forfeit the contest,” Riojas said.

A decision from the executive committee is expected to come next week, if not Friday. Memorial, for now, is 6-9 and 1-4 in 22-5A.

Memorial will play at Central on Friday.

Around the Bob Hope School campus, boys soccer coach John Morgan and his players sense the excitement from their classmates... read more