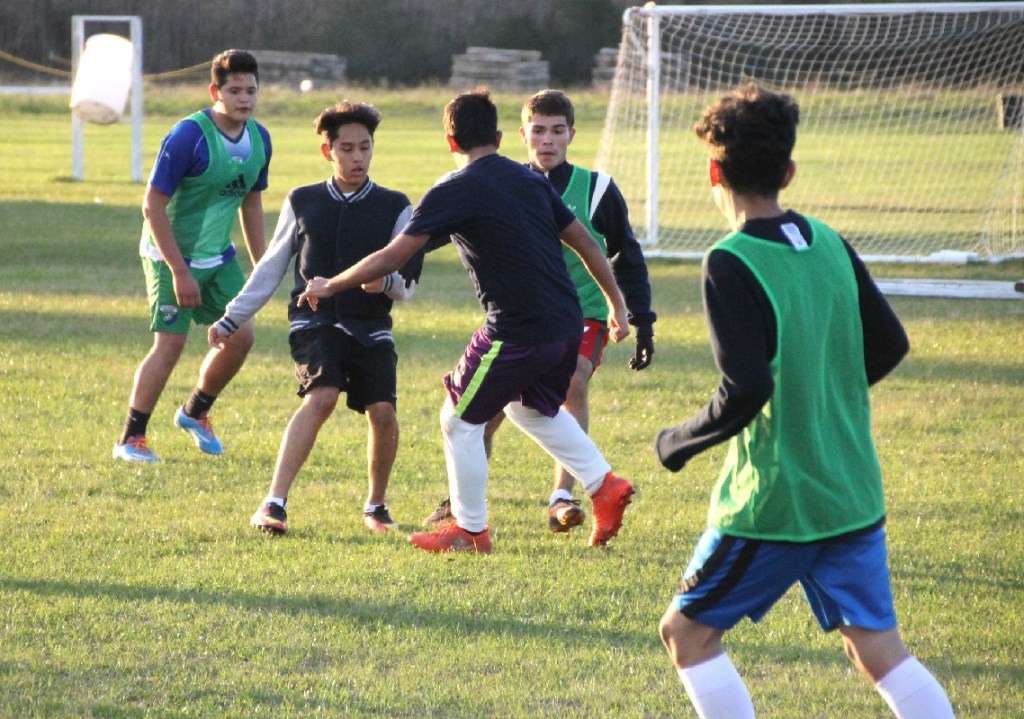 Around the Bob Hope School campus, boys soccer coach John Morgan and his players sense the excitement from their classmates and co-workers about what’s already been a successful first season in the UIL.

“I guess the mood would be … excited?” the first-year Eagles coach said. “Everyone’s asking, ‘When’s they next game? When do we play? Who do we play?’ Those who can’t make it to the playoff game, people have been texting updates to them on the score.”

They now have their answers.

Bob Hope (9-7-2) will take on La Vega (13-5) at 7:30 p.m. Friday in the 4A area round at Crockett’s Monte Jack Driskell Stadium, 1600 SW Loop 304. The match was originally scheduled for 8 p.m. Thursday at Brenham, but Morgan said the UIL called both teams and asked them to not play on a school night during State of Texas Assessments of Academic Readiness testing. Morgan added La Vega got to select the location if Bob Hope selected the time.

But even if the game was still set for Thursday, the Eagles would have been ready to play, Morgan believes.

“Everybody’s ready,” he said. “Usually our practices are just doing a few things and getting a few touches on the ball so we don’t get too cold.”

Bob Hope is coming off a historic 3-0 win over Jasper at Memorial Stadium in Port Arthur on Friday, taking advantage of a home field of sorts. The Eagles played their actual home games this season at the Gulf Coast Youth Soccer League fields on Twin City Drive.

“Jasper is a really good team,” Morgan said. “Like most teams, they try to channel one or two players. I think when you do that, you can limit yourself. We were able to capitalize on that.”

Now, the Eagles are in for what Morgan thinks is a match of similarities.

“In seeing them, they work it around the field and find the open man,” he said. “They’re waiting for you to make that mistake.”

The winner will face Liberty or Lufkin Hudson in the regional quarterfinals.

All UIL boys and girls playoff games this weekend are in the area round.

Port Neches-Groves coach Chad Luttrull said his team might have gotten in 45 minutes of outside practice Wednesday, but the wet weather, of course, had other plans for the Indians.

A little bit of controversy gave Furr a third seed out of District 24-4A instead of its original fourth place, according to Luttrull. Furr won a fourth-place tiebreaker to get into the playoffs, but when Houston Madison was found to have an ineligible player, the Marlins forfeited two matches and dropped out of the playoffs, moving Furr up one spot and allowing Houston Austin in.

The Indians have been shutout artists this season with 17 to their credit, most recently dispatching New Caney 5-0. That not only tied a school record for shutouts but did the same for wins in a season.

While Preston Riggs had three goals against New Caney, much of PNG’s success is credited to a defense led by fourth-year players Christian Davalos and Chase Gordon.

The strong wind going in New Caney’s direction did nothing to help the Eagles.

“That wind was something else,” Luttrull said. “It was 24- or 25-mph wind. They elected to have the wind behind their back, and they only had two shots on goal.”

Humble or Sharpstown will take on the PNG-Furr winner.

But there won’t be a third meeting between the teams — yet. Both would have to advance to the Region III final, or fifth round, at Turner Stadium in Humble.

Next on the Bulldogs’ docket is Fort Bend Elkins, a team that’s coming off a 7-0 rout of Houston Northside. That’s at 5 p.m. Friday.

Port Neches-Groves will follow with a game against Santa Fe.

The Mid-County doubleheader in Chambers County comes at a good time for Nederland. For the first time this season, coach Keith Barrow said, each of the Bulldogs are healthy.

“Madison Diaz started out a little sluggish as to be expected, but once she got her confidence and strength back, she was good to go,” Barrow said. Diaz was coming off an ACL tear late last season.

Nederland just made it to the area round with a 1-0 win over Barbers Hill at Lamar University, and Barrow said the Bulldogs spent lots of time looking at game film Wednesday.

“Their [BH’s] keeper is really good, but we had some chances to put the game away and we didn’t,” Barrow said. “So, we’ve been working on finishing.”

Barrow added he’s expecting a “track meet” between the Bulldogs and Knights because both teams are attack-minded and utilize their speed well.

“They’re very attack minded,” he said of Elkins. “They run a 3-4-3, so their philosophy is get the ball up top to the forwards and let them do their work. We got a lot of speed and we’re attack-minded, too. So, I think it’ll be a track meet.”

The winner will play either Manvel or Lumberton. Nederland is 1-0-1 against Lumberton this year.

“Stallworth is our home away from home,” girls soccer coach Aimee Bates said. “Every season we play at least one match there, and it feels like home. It’s always between us and the Houston schools. We like the area around it, and we play good soccer there.”

But for Bates’ Indians to play there, they had to get a couple of monkeys off their backs.

They won at Turner Stadium in Humble for the first time in team history, and they did it taking a charter bus there. The mode of transportation is important because the Indian girls never won coming off a charter bus.

On the field, PNG has bused over the competition to the tune of a combined 101-6 score.

“I think we’re just peaking at the right time,” Bates said. “Every match, we continue to get better and I feel our defense is just clicking. Moving the ball and doing great things. We can beat you with speed and our defense and put it behind you. We have so many different weapons, no matter what they throw at us, we can put it in the back of the net.”

PNG played Santa Fe in a preseason scrimmage, coming from behind to win 3-2. Bates said she remembered Santa Fe’s Indians being very physical.

“They’re very good in the air,” Bates said. “They attack from the outside and like to put the ball in the air.”

The winner of Porter vs. Texas City awaits the Indians — either PNG’s or Santa Fe’s.

PREP ROUNDUP: Morse gets it done: One-run single in…