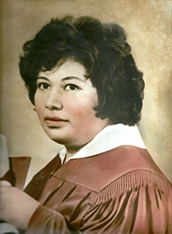 Delia was born on December 12, 1944 in Port Arthur, Texas to parents Juanita and Rosario Estorga. She was a lifelong resident of Port Arthur and she had worked for many years at Dial a Maid. Delia was an avid reader and enjoyed spending time with her family, who will miss her dearly.

She is preceded in death by her parents, Juanita and Rosario Estorga; her niece, Cynthia Davalos; her nephew, Louis Estorga Jr.; her sister in law, Diane Estorga.

Deaths and funeral services for March 28: