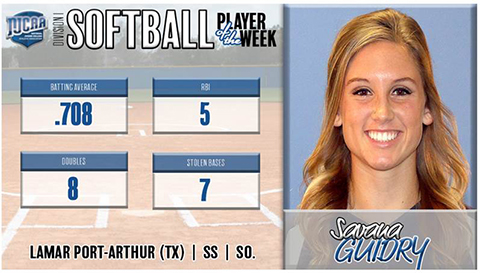 For the News
Congratulations to Seahawks sophomore shortstop Savana Guidry for being named the National NJCAA Division I Softball Player of the Week!
Guidry is a graduate of Nederland High School and came to LSCPA after a season at Houston Baptist University.
This past week, Guidry put together a huge performance, hitting .708 with a .741 on-base percentage over a six-game NJCAA Region 14 schedule.
She had three triples, eight doubles and seven stolen bases as the Seahawks went 4-2 after splitting with Alvin Community College and Laredo College while sweeping Coastal Bend College.
Fans get a chance to see Guidry in action on Saturday when she and her teammates take on Alvin Community College at Martin Field in Beaumont. That doubleheader starts at 2 p.m. with the second game 30 minutes after the conclusion of Game 1.