Lightning may be cause of PA apartment fire 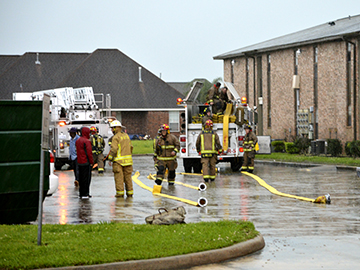 Port Arthur Firefighters breaking down equipment after extinguishing a fire at Sherwood Forest Apartments on Saturday morning. The cause of the fire remains under investigation but preliminary investigation shows the fire may have been caused by a lightning strike. Mary Meaux/The News

A lightning strike during a strong thunderstorm may be the cause of a fire at Sherwood Forest Apartments on Saturday morning.

Twelve apartments were affected with most of the fire damage confined to the attic area.

Port Arthur Fire Department responded around 9:20 a.m. to the scene at 4710 Jimmy Johnson Blvd. where there was a report of flames coming from the roof of a section of the apartments, according to a press release from the city of Port Arthur. 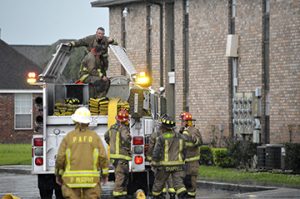 When they arrived, firefighters found heavy smoke and flames coming from the attic on one wing of units. The blaze was under control and extinguished within an hour.

PAFD units stayed on scene for some time checking for an extension of the fire and conducting salvage and overhaul operations.

All utilities to the 12 units were disconnected due to varying degrees of water damage or damage to the electrical service. 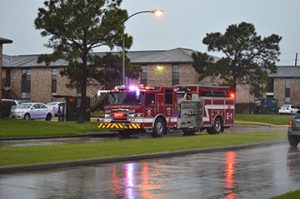 Lightning is a possible cause of a fire that damaged 12 units at Sherwood Forest Apartments, 4710 Jimmy Johnson Blvd., on Saturday.
Mary Meaux/The News

The cause of the fire is still under investigation and preliminary indications suggest that the fire may have been caused by a lightning strike.