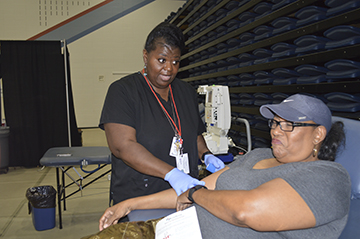 The Carl Parker Center on the Lamar State College Port Arthur Campus was transformed into a medical facility of sorts for a health fair touted as ‘Take a loved one to the doctor day” on Saturday.

Inside, locals like Deborah Love were giving blood at the LifeShare Blood Center booth while others like Johnnie Green took time to tour the many booths and visit a doctor for free.

“I’m here with my brother and we walked by this table and they asked if I would be willing to give blood,” Love said as Tammie Little with LifeShare bandaged her arm and gave her instructions for after the life saving donation. 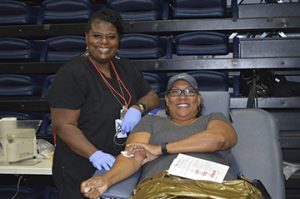 Little said she had seen a steady stream of people at the center despite the stormy weather.

Green said she enjoyed the health fair as she walked by the numerous vendor tables set-up inside the gym.

“This is a good event,” Green, who sees a physician on a regular basis, said. “A lot of people don’t go to a doctor like me.” 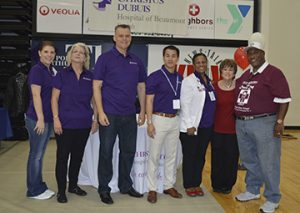 Representatives of Christus Health, health officials and County Commissioner Michael Shane Sinegal stop for a photo during a health fair at the Carl Parker Center on Saturday.
Mary Meaux/The News

“Despite the rain and stormy weather everybody I’ve seen is having a good time,” Sinegal said.

The idea of a community health fair came from County Commissioner Bo Alfred who holds one for the north portion of the county. This marks Sinegal’s sixth time to host the fair.

“The streets are flooded and this means a lot,” he said of the number of people who braved the weather to attend. “If you save one life it’s worth it. This partnership is a Godsend.” 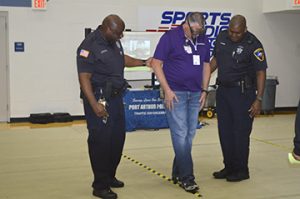 Gregg Ellsworth, director of business development with Christus Dubuis Continuing Care and Tommy Le, administrator with Christus, were pleased to be partners in the health fair.

Le said 20 physicians, four to five nurse practitioners and an eye physician were on hand to visit with patients.

“This is a one stop shop for the basics. You can meet with a physician, have your blood pressure taken and more,” Le said.

Lightning may be cause of PA apartment fire