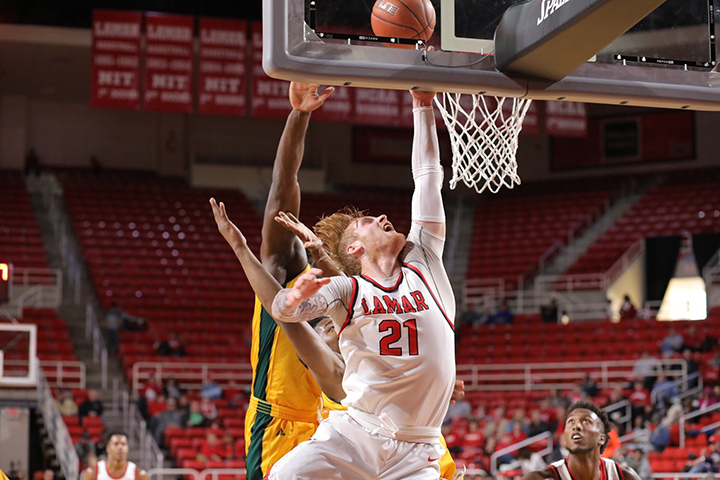 BEAUMONT – Lamar University junior forward Colton Weisbrod has been chosen as a member of the National Association of Basketball Coaches’ (NABC) All-District team, announced the national organization Wednesday afternoon. The Nederland native is the first Cardinal chosen to the group since Kenny Dawkins and Jay Brown were picked nine years ago.
The second-team honor comes following a season where Weisbrod helped the Big Red to 19 wins in the regular season and a postseason berth, both for the first time since 2012.
A former first-team NJCAA All-American, Weisbrod made an immediate impact with the Cardinals in his first season from Lamar State College-Port Arthur. He led the team and finished sixth in the league in scoring (15.1 points per game), second in rebounds and field-goal percentage (52 percent).
He started in every game for LU in 2016-17 season leading the team in scoring 16 times and in rebounding for 21 contests. After a three-game stretch in non-conference action when he averaged 27 points and more than 11 rebounds, he was voted on by league sports information directors as the Southland Conference Player of the Week.
A double-double machine, he finished tied for third in the Southland with 10 double-doubles just one away from the overall lead. He scored in double-figures in his first seven contests and 26 times overall, and followed that with 10 or more rebounds 10 times. His career best on the boards was 17 at Idaho State.
Weisbrod had two 30-point efforts with his best (34) at against Southeastern Louisiana. He closed out the regular season with a 32-point game against cross-state rival McNeese.