Meeting gets input on comprehensive plan from PA residents 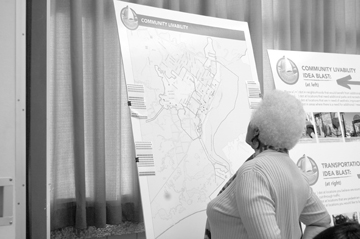 The Imagine Port Arthur! meeting was held on Thursday night at the Port Arthur City Hall on the city's comprehensive plan project.

What would you like to see happen in Port Arthur?

That was the question asked at the Imagine Port Arthur! meeting on Thursday night at Port Arthur City Hall Council Chambers. The meeting’s slogan was “make your voice heard for the future of your neighborhood!”

Freese and Nichols, an urban planning group, conducted the meeting. The meeting was the fourth and final one for District 1 residents.

“It’s time for updating,” he said. “This is a unique opportunity to make some kind of contribution.”

Shad Comeaux with Freese and Nichols said the first step is public outreach. He said the comprehensive plan is a living document and not the final answer to all things.

Michelle Queen with the firm gave a community snapshot presentation.

She said the median age in the city is 35.3 years old. However, there are many families with small children as well as many retired people.

Alexis Garcia with Freese and Nichols conducted a TV survey and discovered there are not enough bike trails or sidewalks, particularly along Gulfway Drive, in the city.

Another concern was highway signage diverts traffic away from the inner city, bypassing the West Port Arthur area.

One resident said there are many fatalities on Highway 69, both south of Highway 73 and near Central Mall because there’s no way to cross.

A lack of lighting in the city make things “unsafe and scary.”

Willie “Bae” Lewis Jr., District 5 councilman, said he has a plan with Entergy to change out 5,100 lights to LEDs. Entergy will change the lights for $25 a head.

The pilot program will light up Procter Street to the KSC underpass with LEDs.

Lewis further believes there will be future retail development on Ninth Avenue when traffic problems are fixed.

Lewis said another project he’s working on is developing a waterfront park on Pleasure Island. He said he can also get some white sand for the park.

One resident agreed and wanted more ecotourism on the island even if it’s smaller investments.

A resident said there were once businesses all along Seventh Street on the west side. However, zoning ordinances won’t let new businesses locate there and that prohibits growth.

Another concern was more entertainment complexes were needed to host conventions.

One resident was curious if a second bridge would be built to Pleasure Island. Lewis said the key to building the bridge would be to get more traffic on the island. The state, though, would do the planning and that could take 25 years to complete.

Lewis reminded the audience the Port Arthur Economic Development Corporation is building 30 new homes downtown after voters approved a bond in May 2016. There may be more houses built since the U.S. Department of Housing and Urban Development is interested.

On the other hand, Lewis thinks the largest investment in downtown Port Arthur is Lamar State College-Port Arthur, particularly since new dormitories have been built.

Other residents voiced better equipment and lighting is needed at parks, a fun zone for children should be established, commercial resources are necessary for downtown to generate new revenue and some type of public transportation between Port Arthur and Beaumont is needed.

The last comments concerned the youth in the city.

A curfew is now enforced at Central Mall for minors.

Additionally, there is nowhere in the city to treat substance abuse addicts.

“The heart problem of Port Arthur is our youth,” one resident said. “There’s no where for kids to go. We need more programs and more community centers and things for them to do.”

Another resident said children are Port Arthur’s largest asset and they need something to bring them back to the city after they move away.

“They need a job after they get a degree,” the resident said. “We need to attract the kinds of business to bring the kids back and tell them they have a future here. They can grow here and have a family here.”

One resident said the children don’t know how to socialize and the city needs to make them feel welcome.

Lastly, a resident was in favor of having parenting classes and reaching out to at-risk children.

“We need funding for these programs,” she said.