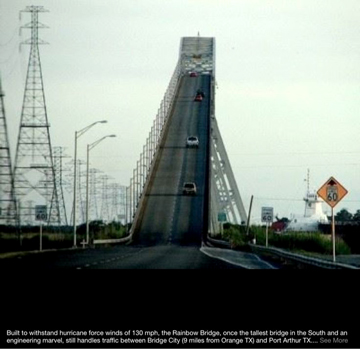 The Rainbow Bridge, the tallest bridge in the south, helped move increasing traffic in the 1930s.

Sam Monroe, president of the Port Arthur Historical Society, said when the Rainbow Bridge was completed it was a big improvement over the old ferry that could only carry six cars.

“The traffic was building up between Orange County and Jefferson County in the 1920s and 1930s and the wait for the ferry was too long,” he said. “The Texas Highway Department proposed building a bridge, but officials in Beaumont were concerned about a bridge bypassing their refineries and about ship traffic on the channel.”

The solution was to build the tallest bridge in the south. In fact, the bridge had to be high enough so the tallest ship in the U.S. Navy in the 1930s could pass underneath.

“That standard still meets the needs of industry today,” Monroe said. “The road lanes used to be narrower. Four feet were added to widen them and lights were added in 1992.”

“It’s a dangerous bridge, but somehow the accidents are limited. Drivers must be on their best behavior.”

The text of the Texas Historical Marker reads as follows:

The rapid growth of the petrochemical industry in Jefferson and Orange counties in the early 20th century led to increased population in this area. In order to serve escalating transportation needs, plans began in the 1920s for the construction of a bridge to span the Neches River.

Due to the depressed economy and differences of opinion among business leaders, the campaign to build the bridge (led by the Port Arthur “News” and American Legion Post No. 7) lasted for seven years.

The project engineer, G. G. Wickline, used innovative techniques to design a bridge that would cross 7,742 feet of marshy terrain and river bottom. The bridge’s 680-foot central span, designed to clear a Navy ship carrying a moored dirigible, was, at 176 feet, the world’s highest elevated roadbed over tidal waters.

Meeting gets input on comprehensive plan from PA residents