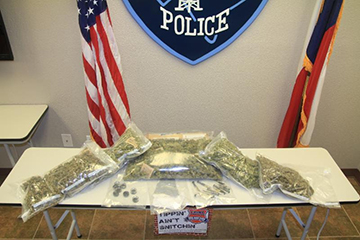 Approximately six pounds of high grade marijuana, oils and wax were found during a search of a Port Arthur home. Courtesy photo

A person has been arrested in connection with a 2-year investigation into the delivery and distribution of illegal narcotics in the city of Port Arthur on Friday.

Port Arthur Police Department Narcotics Officers, with the assistance of the United States Postal Service and Port Arthur SWAT Team, conducted a search warrant in the 3900 block of Shadowbend Lane. A search of the home uncovered approximately six pounds of high-grade marijuana along with THC oils and wax, according to a press release from the PAPD.

Rogers Harrison III, 34, was taken into custody for an outstanding Jefferson County warrant for delivery of a controlled substance.

The search warrant was a result of a 2-year investigation.