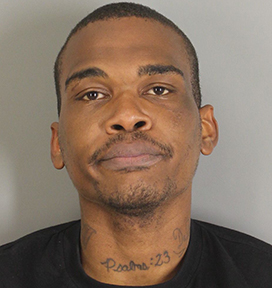 GROVES — A man wearing a leopard print robe with orange gloves and orange Croc’s and armed with a hairbrush attempted to rob McDonald’s in Groves early Thursday morning.

The suspect, identified as Gevondis Demond Joseph, 29, of Port Arthur, was arrested after a brief foot chase across the street to the Cricket Wireless store parking lot and was almost hit by a car while running, Groves Police City Marshal Norman Reynolds Jr. said.

The bathrobe bandit, who also had a black piece of cloth over his face, entered the eatery at 4500 Twin City Hwy. around 5 a.m. by a door that was accidently left open. Officers were originally told the suspect was armed with a handgun but later learned the suspect had used a hairbrush under his robe to make it look like a weapon.

“Some of the employees fled but he stopped one and demanded money,” Reynolds said.

No injuries were reported in the incident.

Reynolds said he has been asked why the suspect was wearing the odd choice of clothing to which he answered — he may have been going to Walmart to make the top People of Walmart webpage.

Joseph is charged with aggravated robbery, a first degree felony.