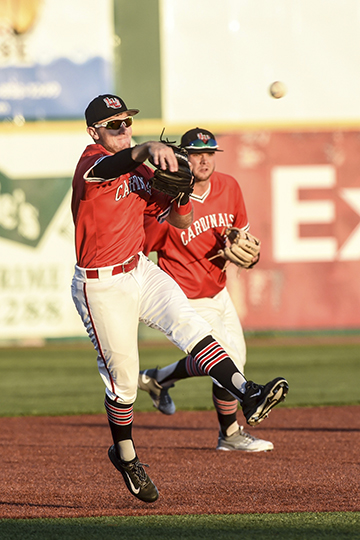 Lamar's Philip Ingram (2) fields a ground ball and records an out during the Cardinals game against Northwestern State University Wednesday in Beaumont. Brian Vincent/for the News

BEAUMONT – Northwestern State put up two crooked number innings early, but Lamar University baseball never let it get a shutdown inning and poured on runs when the Cardinals downed the Demons 12-6 in non-conference action at Vincent-Beck Stadium Wednesday night.

David Fry opened up the game for NSU (5-14) with a two-run home run to left center in the first inning, but Big Red (12-10) wasn’t going to be outdone and put together six-RBI base knocks for seven runs, topped by a two-run double from Cutter McDowell, in the bottom of the frame.

McDowell led off the inning with a deep drive to left field, but NSU’s fielder Tyler Smith made a running grab against the wall. Freshman Cole Coker followed with a single, and after back-to-back doubles from Reid Russell and Robin Adames the Cardinals were tied at 2-2.

Adames was sent home on a two-out double by Chad Fleishman, which was the first of five straight two-out base knocks. Mitch Andrews, Phil Ingram and Grant DeVore all singled – DeVore’s and Andrews’ scored runs – before McDowell chased home Ingram and DeVore with a double down the left field line, his first of three two baggers on the day.

“Our guys responding to their runs was big,” said head coach Will Davis. “During batting practice, the wind was blowing in and it didn’t feel like it would be an offensive day.”

“It was great to see them respond with great at-bat after great at-bat for the seven spot in the first, especially after the two-run homer,” he said. “When you score seven in one inning, you should win. (NSU) made it close with a big inning in the fourth, but we responded to it and then put them away late in the game.”

The Demons cut into LU’s lead with a three-run fourth and made it 7-5, but Adames pushed it back out to a four-run lead with his third home run in four games. Wednesday’s was a two-run shot to left center that scored Reid Russell – after his two-out double to right center.”

“Cutter is a guy who can be a little streaky, but fortunately he was still walking during his cold streak this year and really helping the team out,” said Davis. “But after last week and today, you see what he can do when he’s on a hot streak.”

McDowell was a piece of the lone run scored in the seventh inning that pushed the score to its final, 12-6. Ingram led the inning off with a walk and advanced to third on McDowell’s final double. Coker stepped up the plate and belted a deep fly ball, but Austin Townsend was able to get under it for a sacrifice fly.

Both McDowell and Adames had 3-of-5 days at the plate. McDowell drove in four runs and Adames three. Grant DeVore and Reid Russell chimed in with two hits apiece, and each scored twice.

“I think Grant is getting more-and-more comfortable. He is a guy that hit over .400 in junior college,” said Davis. “We’ve had some injury issues in center field this year, and I’m so glad that we took a look at Grant out there. He had a nice diving play today and made all the plays at Southeastern. I think the bottom of our lineup is getting stronger.”

DeVore made a tremendous diving play in the second inning that helped Galen Andrews (2-0) keep the leadoff hitter off the bags, and led to a clean inning.

Every Cardinal starter contributed with at least one hit in the 15-hit contest. Phil Ingram was 1-for-1 with three runs scored from the eighth spot. Fleischman, Trey Silvers, Andrews and Coker all added one hit apiece. Nine of Big Red’s runs were scored with two outs.

Ryan Cawthon pitched a scoreless seventh inning with a walk and hit allowed before Jace Campbell took the hill for the eighth frame that was also scoreless. Tanner Driskill pitched the ninth, and was an infield error short of being perfect.

NSU starter Dan Hlad (0-2) was pulled from the game just before McDowell’s first double. He gave up seven runs on seven hits, with no walks or strikeouts. NSU worked six pitchers in the contest.

Lamar continues its home stand with the first league action of 2017 at Vincent-Beck Stadium. Incarnate Word pays visit for a three-game series that is slated to start at 6 p.m. Friday.

The Cardinals will run with a new weekend pitching rotation in the series. Carson Lance (3-2, 3.21 earned run average) will move from the Saturday role in to Friday night action. Jimmy Johnson (1-3, 3.12) will go from the closer to Saturday’s contest, and Galen Andrews (2-0, 3.86) will start in Sunday’s contest.

PNG softball brings in a win