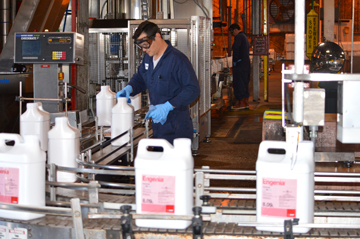 The warehouse where the new herbicide, Engenia, is stored and being prepared for shipment.

Unfortunately they’re on the rise.

BASF, however, is introducing a new product in the fight against weeds. The company held a ribbon cutting ceremony at its Beaumont facility to celebrate the completion of the expansion of its dicamba manufacturing facility for the agricultural facility on Tuesday morning.

In addition, BASF invested more than $290 million in its eight North American agricultural products production sites and facilities that support its agricultural business, helping to provide solutions for growers and contributing to the economic development of the communities it serves.

“Our commitment to North America is clear. The agricultural market is changing, and growers are demanding the newest and most effective technologies to increase profitability,” Rea said. “BASF responded to growers’ needs by making significant investments in production to deliver effective solutions to help farmers manage weed resistance and produce higher yields.”

“We could not have done this without our skilled workforce in Beaumont and across North America who not only help growers, but also help drive our economy.”

Rea also spoke on product stewardship and how the production of Engenia used broad input from stakeholders.

The herbicide features a completely new dicamba molecule, BAPMA salt, which is designed specifically for dicamba-tolerant soybeans and cotton.

Matt Huie, 1349 Food & Fiber and president of Southwest Council of Agribusiness, is also a farmer and rancher in South Texas. He has 6,000 acres where he grows cotton, corn, grain sorghum and occasionally wheat.

It’s now planting season and he uses BASF-made herbicides on his crops. He said the expansion to make Engenia is another massive investment for Texas to create local jobs and expand the economy.

Roundup, that is a glyphosate, was the most used herbicide beginning in the 1970s.

He added that the herbicide made farming easy until the weeds developed a resistance and started to flourish.

Now, farmers can no longer use a “one-stop fix” to fight weeds using Roundup alone.

Huie said that’s where Engenia comes in because it can be used with a combination of chemicals to fight weeds.

“That’s why I support BASF’s research and development of chemicals,” he said.

The expansion project at the Beaumont facility started in January 2016. There are 175 employees at the facility, some employees are multi-generational. Seven hundred contract laborers were hired for the expansion.

In addition to dicamba, the facility also produces dimethenamid and imidazolinone.