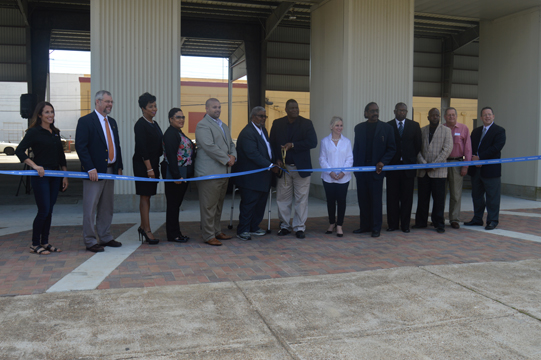 Port Arthur officials along with contractors and others cut the ribbon for the Port Arthur Pavilion and People's Park Tuesday. (Lorenzo Salinas/The News)

New life is being breathed into the downtown area of Port Arthur with the grand opening of the Port Arthur Pavilion and People’s Park on Procter Street.

On Tuesday, city officials and residents attended the 2017 Rededication and Ribbon Cutting of the Port Arthur Pavilion and People’s Park on Procter Street and Jerry Smith, director of Port Arthur Parks and Recreation, said, “It’s an opportunity to bring people back downtown and to enhance the quality of life for the residents of the city.”

Smith said it was the first wave of things to come for the City of Port Arthur.

“It’s also to help encourage businesses to come back down,” he said.

“We were exactly on budget with that,” Smith said. “We were not a dime over.”

Smith said other phases were in the works to improve the streets and sidewalks of downtown.

A water area is one of the park’s special features.

Smith said the splash pad, or water play area, was a way to attract kids and their families to the area, as well as a fun way to cool off in the heat. 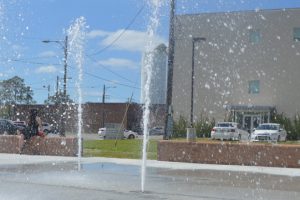 The water play area was on full display at People’s Park at the ribbon cutting ceremony Tuesday. (Lorenzo Salinas/The News)

Smith also brought attention to Port Arthur’s first ever Movie in the Park event, where residents could watch a free showing of a film projected large onto side of the Port Arthur EDC building from the comforts of People’s Park.

The showing begins at 8 p.m. on April 14. The movie will be “Hidden Figures.”

Smith welcomed the attendees to the rededication and ribbon cutting and listed some of the pavilion and park’s goals.

Among them, Smith said the project was to improve the value of the Port Arthur quality of life. It also included irrigation upgrades, ADA access, park benches, trees, a water play area and a harp system that plays music whenever wind blows through it. 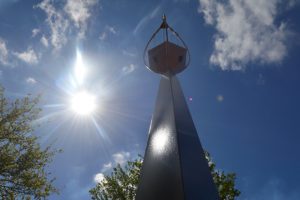 The harp system made music as wind blew through it at People’s Park. (Lorenzo Salinas/The News)

Mayor Derrick Freeman was in attendance and called the whole thing “exciting.”

“It’s an exciting time in Port Arthur, especially when we’re having a groundbreaking or ribbon cutting,” Freeman said. “Although ribbon cuttings are more my style.”

Freeman said, “There are a lot of exciting things happening in downtown Port Arthur.”

Mayor Pro Tem Raymond Scott Jr. seemed to agree, as he cited his district, District 1, as a place where a lot of good things were happening.

He credited Port Arthur EDC Chief Executive Officer Floyd Batiste and the City as having a vision for downtown.

“It’s to improve the quality of life here,” Scott said.

Batiste thanked the EDC’s present board of directors and the citizens of Port Arthur.

Greg Wall with LaBiche Architectural Group said he hoped People’s Park would be a great place for the people of Port Arthur.

Lori William, a contractor for N&T Construction, said they were very proud of the work they had done for the city.

Sgt. Kris Boneau has been reinstated to the Port Arthur Police Department. “No disciplinary action has been taken against Boneau... read more