Water tower should be a big improvement for west side 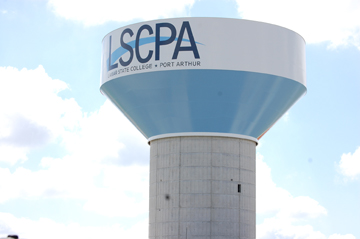 The engineering firm of Arceneaux, Wilson & Cole, LLC hosted a ceremony to celebrate the hoisting of the city of Port Arthur's Terminal Road Elevated Tank on Monday morning at the site.

It took four or five hours to hoist a 2.5 million water tank to the top of the Terminal Road Tower, 138 feet off the ground.

The engineering firm of Arceneaux, Wilson & Cole, LLC hosted a ceremony to celebrate the hoisting of the city of Port Arthur’s Terminal Road Elevated Tank on Monday morning at the site.

A brochure said that, upon completion, the tank will provide local water storage and pressure maintenance as well as provide pressure boosting to the Pleasure Island distribution system to maintain pressure.

Calvin Prosen, senior project engineer with A, W & C, said the tank will also provide water for the downtown area, the Cheniere plant, Gulf pumps on Highway 87 and Sabine Pass.

Motiva Enterprises provided the land and there’s enough room to build an identical tower. This project was designed more than four years ago and is part of the city of Port Arthur’s $90 million water improvement plan, Prosen said.

Benji Talley, operations manager for Landmark Structures, of Fort Worth, said the Terminal Road Elevated Tank is the largest tank they will commission this year.

“This is a blessing and a windfall. Port Arthur is turning a corner,” he said.

Linda Spears, a commissioner with the Port of Port Arthur Board of Commissioners, said she is a true west sider, having grown up on the city’s west side. She said she was excited and encouraged to see the water tower go up on that side of the city.

She called it a together project where different entities worked together.

Willie “Bae” Lewis, District 5 councilman, said the city has been spending $43 million a year subsidizing water and sewer. Cheniere Energy, however, will purchase water from the city for their plant in Cameron, Louisiana starting in 2020. They will pay the city $12 million annually and the city will no longer need to subsidize the water and sewer out of the general fund and this should bring down the tax rate.

General Manager Greg Lucchesi with Motiva Enterprises said the 2.54 acres was made available several years ago for the city at the nominal appraised value of $165,000.

Matt Barr, with Cheniere Energy, that provided $7,564,000 for the project, said the tower was made possible through public and private partnerships.