Kicking up a storm: Sheppard proves a scoring machine for Nederland 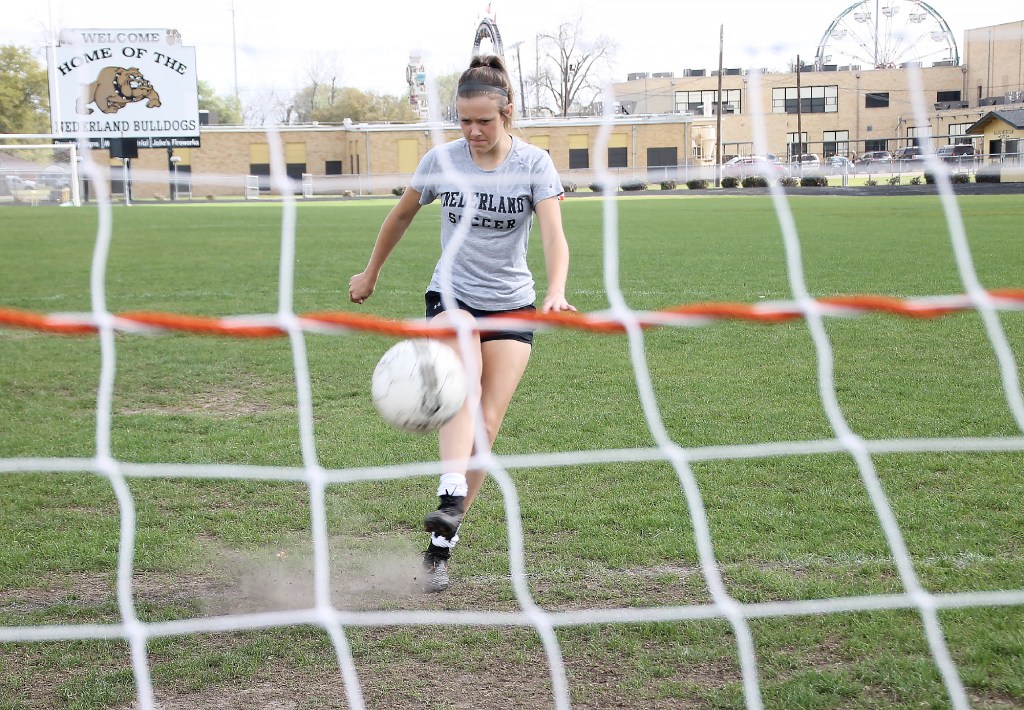 Meg Sheppard has 33 goals and 14 assists on the season for Nederland. (I.C. Murrell/The News)

NEDERLAND — In almost any soccer match, Nederland sophomore Meg Sheppard can draw — make that — command plenty of attention. How can anyone who’s had three games of four or more goals be overlooked?

“It all starts with my teammates and how they can get me the ball,” the forward said. “It makes my job easier putting it in the back of the net when they have my back.”

While Sheppard has given opponents fits with at least 30 goals each of the past two seasons, she’s had quite a cast of stars behind her. To name a couple, senior Madison Ledet signed with Lamar at the start of the season, and standout goaltender Emma Roccaforte is headed to McNeese State in August.

In another 2½ years, Sheppard expects to join Ledet at Lamar, although she can’t sign with the Cardinals until her senior season.

“They don’t come around very often,” Barrow said, asked about coaching a sophomore standout on the pitch like Sheppard. “She’s kind of got the total package. She’s got quickness, speed and skill on the ball and she knows how to move off the ball.

“She’s got a lot of qualities you really look for in a striker.”

Sheppard has 33 goals and 14 assists to her name. Her father estimates she scored 32 last year, but Barrow confirmed she led District 22-5A last year with 15 goals and eight assists.

How does anyone stay that consistent so early in a high school career?

“No. 1, very good speed and real good movement off the ball,” Barrow said. “She doesn’t just run up the line. She runs side to side. She’s very good with her right and left feet. She’s accurate with her left, but she has more power with her right.”

Sheppard had four goals each in wins over Port Arthur Memorial, Livingston and Ozen. But her favorite game this season came in a rematch against Lumberton where she scored twice.

“The first time we played them, we tied them 4-4,” she said. “It was just going back at it. They scored three right off the bat. We were down, but we came back and went to overtime. Sadly, we lost on PKs, but the second time, we came out hard and strong, we hurried up and got up on them, and we stayed positive throughout the whole game. That’s what helped us win.”

Sheppard’s consistency helped the Bulldogs finish second in District 22-5A and earned them another spot in the 5A playoffs. Nederland will take on Barbers Hill at 7:30 p.m. Friday at the Lamar University soccer complex, a preview for on-campus students of a possible All-Southland Conference performer.