Maybe the most unique building on the LSCPA campus 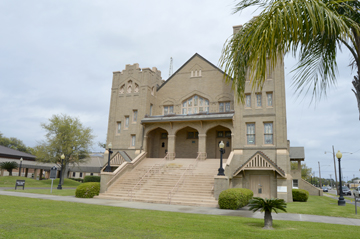 The Fuller Education Building started off as a Methodist church, but it's now a classroom and office space for Lamar State College-Port Arthur.

The Fuller Education Building has served both church and state in its history.

It was built initially as the First United Methodist Church in 1915. Soon after its construction, it served as a literal refuge when it protected residents from the 1915 flood, said Sam Monroe, president of the Port Arthur Historical Society.

In 1918, Helen Keller and Anne Sullivan visited the church for a war bond fundraiser during World War I.

“The church has had a colorful history,” he said. “The building is named after Ruby Ruth Fuller who taught Sunday school from 1921-1963. It was a very popular class. In fact, people would go to her class but not stay for church. She and her husband were very nice people.”

The widow of Rev. Dr. Martin Luther King, Coretta Scott King spoke at the venue as did governors of Texas and Jimmy Carter held a press conference there in 1990.

“We’ve maintained the building through the decades. The stained glass windows are original and the sanctuary has remained unchanged. The church closed and merged with St. Mark’s Methodist in Griffing Park,” Monroe said. “The congregation did not have a deed to the property. John W. Gates allowed the church to build on the campus without a deed, so the congregation could determine the future of the building.”

The building continues to have relevance today and Monroe said he grew up in the church as did his family. His children were christened there and his sister was married there.