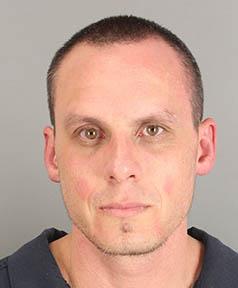 A suspect in several Beaumont burglaries who was arrested on Monday was found to be in possession of drugs and now faces additional charges.

Jefferson County Sheriff’s deputies stopped a black Mitsubishi around 2:30 p.m. Monday that matched the description of a vehicle involved in several Beaumont burglaries that were highlighted on Crime Stoppers.

The driver, Forrest Mabry, 35, of Beaumont, was arrested for no driver’s license and no proof of insurance, according to a press release from JSCO.

A Beaumont man who is a suspect in several burglaries was found to be in possession of 15 grams of meth. He was arrested on several charges.
Courtesy photo

Deputies reportedly saw several items related to burglaries inside the car and a search warrant was obtained. That’s when deputies said they found 15 grams of methamphetamine “as well as a multitude of items believed to have been stolen in burglaries in Beaumont as well as out in Jefferson County.”

Mabry was booked into the Jefferson County Jail for traffic offenses as well as felony possession of a controlled substance — meth. He was charged with retaliation for threatening bodily injury to the arresting deputy.

Mabry was out on bond for felony possession of a controlled substance — meth, stemming from an arrest on Feb. 2. The investigation continues and additional charges could be forthcoming.