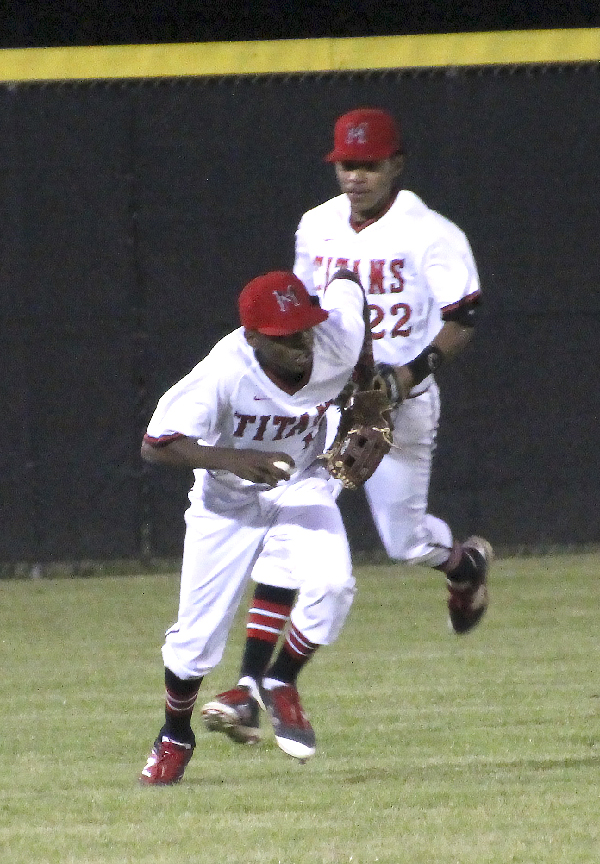 Left fielder Jaylon LaPoint of Memorial hustles off the field after a third-out catch in the second inning against Livingston on Tuesday. Behind LaPoint is center fielder Daniel Mitchell. (I.C. Murrell/The News)

Livingston scored four runs in the seventh inning, and Port Arthur Memorial could not recover at home Tuesday as the Lions took a 6-2 baseball victory in District 22-5A action.

Daniel Mitchell was strong at the plate with two RBI in a 2-for-2 game. He also had a double.

Mitchell also gave up two hits in one inning but struck out one in relief. Livingston got three earned runs off Roberto Collazo, who allowed three hits and punched out one in 1 1/3 innings.

Derek Perez was 1 for 2 with a double for the Titans.

NEDERLAND — Destini Trahan struck out nine in a complete game, and Nederland (13-9-1, 5-0 in 22-5A) gave her plenty of run support Tuesday in blowing out Vidor.

Madelyn Daniel went 2 for 4 as Nederland’s only multiple hitter, and Amanda Longlet drove in two runs for the Bulldogs. Lexi Eversole, Hannah Grumbles, Kassidy Litchfield, Longlet and Trahan accounted for the other hits.

Raven Britt went 3 for 4 and homered for Vidor.

Jourdan drove in two runs and stole a base.

Kaitlyn Boudreaux made stealing bases a clinic in the game with four swipes. She was 2 for 2 with three runs. Brooke Smith and Sydnee Adams each had two hits as well, as Smith drove in four runs and Adams scored three times with two RBI.

LaBure struck out 12 in the win and allowed two hits in five innings. PNG had 11 hits.

PORT NECHES — For only the third time this season, PNG allowed the opening goal of a game.

Logan Riggs, the twin brother to goalie Noah Riggs, put the Indians on the board. Preston Riggs, who’s no relation, ended up with a hat trick, and Garrison Vanhouten converted a penalty kick. Caleb Davis and Mario Oceguera assisted on goals for PNG.

PNG will play New Caney in the first round, but time, date and place for the game have not been set.

NEDERLAND — Alex Celaya broke through for the only goal of the game with 22 minutes remaining.

Celaya headed in the goal from close range. It was his fourth goal in the past two games, and the win is also Nederland’s second in a row.

“We are cleaning up a lot of mistakes and are playing our best soccer,” Nederland coach Torrey Gomez said. “That’s what we want heading into the playoffs. Austin Rich has been excellent as of late and has been winning a lot of balls. Anthony Drago had the clean sheet.”

Saul Ayon finished with 11 saves for Memorial, which finished 5-9 in district play.

Grace Seymour chalked up three goals, and Breeanna Riggs and Jillian Flores each added one in the shutout of the Lions.

Belle of the ball: Kennerson takes TSU to first…