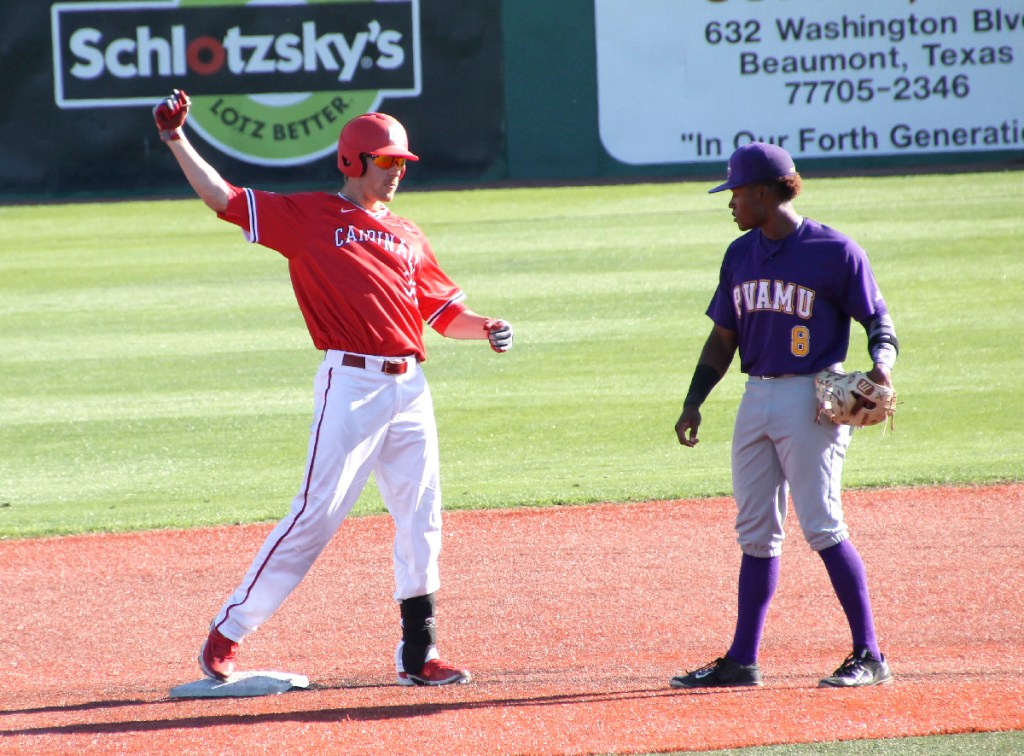 Cutter McDowell of Lamar pumps his fist after a double against Prairie View A&M on Tuesday in Beaumont. (I.C. Murrell/The News)

BEAUMONT – Sparked by Bryndan Arredondo’s three-run shot in the third inning, the Lamar offense came alive and poured on runs in a 15-7 win over Prairie View A&M in afternoon baseball on Tuesday at Vincent-Beck Stadium in non-conference action.

Arredondo was one of two Cardinals (9-8) to belt a long ball. Chad McKinney, his defensive replacement, hit his first career in the bottom of the sixth inning. Up 1-0 in the third, Cutter McDowell and Cole Coker led off the inning with walks. Trey Silvers moved McDowell up on a fielder’s choice and Reid Russell scored him on another fielder’s choice.

After a walk to Robin Adames, Arredondo worked a full count with two outs, and Prairie View (4-16) pitcher Jordan Johnson grooved a pitch that he out over the left field wall. It was his third homer of the year, which tied Silvers for the team lead.

“It was great to see a patient offense. You don’t ever want to give at-bats away,” said head coach Will Davis. “Early on it looked like we were in a little bit of a funk from the weekend. We were able to scratch two, but Arredondo’s home run gave everybody a deep, collective breath and we rolled from there.”

The spark backed a fantastic start on the mound from freshman Nathan Gabryszwski (1-1) on the hill.  Gabryszwski worked four scoreless innings, but was put on a pitch count before the game started. He allowed only three hits and walked none.

“During the midweek in particular, you have to run out guys who will throw strikes and you can trust. [Gabryzswski] looked great,” said Davis. “Part of me wanted to keep going with him, but we’ll need him this weekend and did not want to burn him. He was the story of the game for me.”

He stuck out seven Panthers on Tuesday night and had a string of five straight after he struck out the side in order during the third inning and followed that with another two to start the fourth. Only one base runner reached scoring position on him, and that runner reached on an error.

LU’s offense notched another run in the fifth on a RBI-double to left field from McDowell, but the big inning was a six-run fifth. Adames – who upped his reached base streak to 25 games with the walk in the third – followed a leadoff single to through the right side from Russell with another walk. After a lineout, PVAMU loaded the bags with a walk to Mike Leal, and both Payton Robertson and Brendan Satran drew RBI-walks.

McDowell followed with the second of his three RBI-doubles, this one down the left field line. The senior – who tied for second place for doubles in a game at LU – unloaded the bags on the play. He eventually came around to score after Coker moved him up on single through the right side and a Silvers ground out.

“We know Cutter will get going. It was great to see him do that today,” said Davis. “He’s had four double in the last two games, and that’s been great. We need to get him going.”

At that point down 12-0, the Panthers scratched across three runs in the top of the sixth, but Lamar answered back with its own three in the bottom of the inning, two were on McKinney’s long ball. The other was on back-to-back doubles from Satran and McDowell.

Prairie View was able to take advantage of some errors in the late innings and pulled to the final 15-7 score, two runs in each the eighth and ninth innings.

The staff as a whole struck out nine batters and did not walk one.

As a unit, LU pounded out 11 hits, one more than the Panthers, and drew 12 walks. Big Red struck out only three times – all in the final three innings. It finished the day with six extra base hits, the most since it had 10 doubles in the third game of the Fairfield series.

McDowell notched a game best three hits Tuesday night, his fourth multi-hit game of the season and first three-hit contest. Coker was 2-for-4 in the game, and the top two hitters in the order were a combined 5-of-8 (.625) with three walks and three runs. McDowell also joined for the most RBI in a game this season (5).

Both Adames and Satran scored three runs in the game. Adames was 1-for-3 and Satran 1-for-2.

PVAMU finished with 10 hits, two doubles, and stuck out nine times. Its starter on the mound, Johnson (1-2), took the loss on 2 2/3 innings. He surrendered five runs (four earned) on two hits and four walks.

Lamar returns to the field to host Texas Southern at 4 p.m. Wednesday afternoon. TSU enters with a 4-11 overall record, but defeated Prairie View in a three-game set in the most recent weekend.