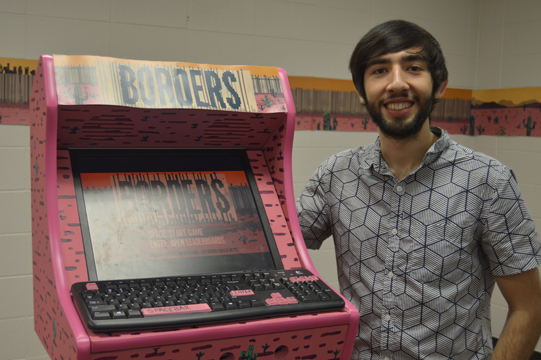 Imagine you are crossing the desert. You’re dying of thirst and you’ve just been separated from your group. You have no idea where to go and everything looks the same.

Then, you hear a buzzing overhead and see people with guns coming toward you. You have not found safety; in fact, the opposite has found you. Your skeleton will litter the desert floor.

This is not just a harsh reality for many immigrants; it also serves as the basis for a free online video game from Port Arthur resident Gonzalo Alvarez. Welcome to the world of “Borders.” 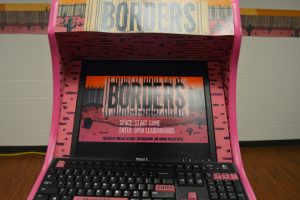 “Borders” depicts the hardships of immigrants’ treks through the desert in order to cross the border to the United States. (Lorenzo Salinas/The News)

“So, I sketched this out last year in my sketchbook because I had this idea from a lot of people complaining about immigration,” Alvarez said. “And I was like, ‘How can I come up with a game mechanic that would sort of simulate what it’s like being an immigrant crossing the border.’”

Alvarez, 23 and a fine arts student at Lamar University, consulted with programmers on how to make his idea a reality.

“From the very beginning, I wanted to make sure it was something that wasn’t dark or ugly per se. That’s why I went with pixel art. The ambiguity of pixel art helped it be approachable to not only anyone, but also older folk or people who aren’t used to playing games as much.”

Alvarez cited early games like Mario Bros. and Zelda as visual inspirations for his work.

In playing the game, one can see how “Borders” introduces complex issues through a simplistic interface. The bright blocks of pastel pinks and stucco browns that form the desert serve to hide a darker truth that many immigrants face — namely that of survival.

Players must be in a constant search for water jugs to stave off dehydration and be in an almost frantic state of awareness to avoid discovery by roving Border Patrol agents.

“It was pretty much creating a simple, approachable, almost pretty (game),” Alvarez said. “Or, for lack of better terms, an aesthetically pleasing game but with a deeper, darker meaning.” 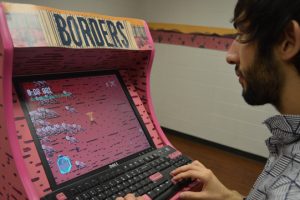 Alvarez said he wanted to raise awareness of immigrants’ plights with his video game, especially in the more sobering aspects where literally hundreds of skeletons dot the virtual landscape.

In a unique twist, players who die in the game have their characters’ bodies remain where they had fallen, even after the game restarts. This means the desert level is filled with the skeletons of all those who have died before.

“I feel that it hits home, and people kind of see that ‘I have an actual impact on this; and if it’s actually this hard to cross the border in this video game, I could only imagine how real life must be,’” Alvarez said.

The game’s harrowing moments were informed greatly by Alvarez’ own parents who crossed the border more than two decades ago.

“My parents told me about how hot the desert was, crossing the river (and) avoiding the helicopters and Border Patrol. That was all directly influenced by my parents, as well as the skeleton.”

Alvarez also wanted to create a sense of empathy with those who saw or played his game.

“There was a lot of hate toward immigrants; and, my parents were immigrants. So, I just wanted to get the message out there that it is hard for those people trying to cross.

“It’s not like there’s a thousand of us jumping the border every second. Really, it’s maybe a fraction of those people who are making it and the other fraction of them are deceased now.”

The method through which Alvarez hoped to form a bond between player and character was also his main determinant in making it a video game.

“I could have easily made a comic or a movie; but, I feel the act of having to keep this character alive through these obstacles — I feel like that act teaches the player the difficulties instead of telling the player.”

Alvarez said video games were an all-encompassing medium that allowed him a greater freedom of expression than any one form would.

“You have sound, you have visuals and, on top of that, you have interactivity. I feel that interactivity allows the medium to be able to communicate something in a much more powerful way.”

Alvarez called “Borders” a form of “active participation” as opposed to the more passive ones that movies and shows provide.

“Playing a video game puts you in an active state; and in that active state, you’re probably able to absorb the message a lot more in a way you can understand because you’re simulating an experience.

“In short, it feeds you an experience.” 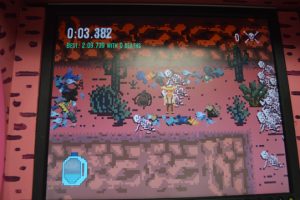 “Borders” depicts the hardships of immigrants’ treks through the desert in order to cross the border to the United States. (Lorenzo Salinas/The News)

“Borders” can be downloaded for whatever price you may feel like paying, including free.

Mayor hopes forum cleared the air for some