Mayor hopes forum cleared the air for some 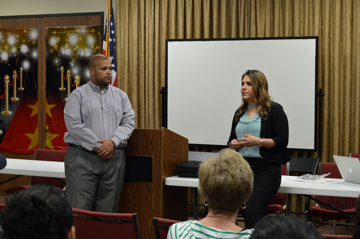 Mayor Derrick Freeman and the city staff hosted a Hispanic Forum starting at 9 a.m. on Saturday at the Port Arthur Public Library in a questions and answers session. Raquel Ochoa with the Greater Port Arthur Chamber of Commerce served as one of the translators.

It was standing room only for a Saturday morning meeting.

Port Arthur Mayor Derrick Freeman and the city staff hosted a Hispanic Forum starting at 9 a.m. at the Port Arthur Public Library in a questions and answers session.

Officers with the Port Arthur Police Department including Chief Patrick Melvin were present. Freeman said residents should never hesitate to call the police because they are there to serve.

“There should never be a fear of dealing with our police,” he said. “If you’re a victim of a crime or if you see a crime committed, don’t hesitate to call. Public safety and infrastructure are what we do at the local level in the city of Port Arthur.”

Melvin said he is concerned about residents’ safety.

“We don’t want you to be afraid. We’re here to protect and serve you. If you’re a victim of a crime we will treat you as a victim. Whoever breaks the law we’ll enforce that also.”

He added that he needs to know if an officer is out of line in carrying out his/her duty. Residents may call 409-983-8613 if they have a complaint.

Melvin also gave a PowerPoint presentation of the PAPD immigration policy introduced in October after he arrived in the city. All of the officers are familiar with the policy and every officer is held accountable.

Many questions arose as to what is the proper identification to use when speaking to the police.

One resident said an officer pulled over a friend for a traffic violation. The friend was taken to the Jefferson County Jail and they couldn’t be bailed out because they were turned over to Immigration Customs Enforcement.

Melvin said they can only enforce PAPD issues. For instance, Jefferson County may have a different immigration policy.

He added that he was concerned if an officer asked for an additional identification if the driver has a valid driver’s license.

Fernando Ramirez, who teaches ESL and citizenship courses at the PAPL, said only federal immigration officers can ask for a person’s status. A police officer does not have that right.

Another question involved a passport as identification. Officer L. Sanchez who served as a translator, said it can be used for identification purposes, but not in place of a driver’s license in which they will be ticketed if they don’t have one.

One resident asked if the city provided identification cards. Sanchez said the State of Texas doesn’t allow that because they have their own transportation codes.

Ramirez said residents are fortunate they live in a city that takes identification from other countries because not all cities do so.

Melvin said residents need to report things so the PAPD can change things.

“We don’t know what we don’t know. Tell your friends and family,” he said.

Ramirez said there’s been a change in the city’s police chief and police officers and they are not immigration officers.

The next topic of discussion was on sanctuary cities.

Freeman said there is no official definition of what a sanctuary city is. Furthermore, the city of Port Arthur does not have a jail as they use the Jefferson County facility.

“Since we have no jail in the city, there’s no way we can be out of compliance with retainers from ICE,” he said. “What Port Arthur is is a welcoming city. We’re la familia.”

He said the Texas Senate passed SB 4 on a vote of 20-11. It now must pass the House of Representative and then signed by the governor before it can become law.

SB 4 relates to the enforcement by certain state and local governmental entities and campus police departments of state and federal laws governing immigration and to related duties of certain law enforcement and judicial entities in the criminal justice system; providing civil and criminal penalties.

Freeman called the bill “worrisome,” there’s language in the bill that would “limit my free speech” and make things like the Hispanic Forum illegal, and “turn our police force into an immigration force that a lot of us don’t agree with.”

Ramirez said there’s a list circulating on the internet labeling Port Arthur as a sanctuary city. He asked how could the city get off the list so there wouldn’t be any repercussions.

Freeman said some reporters and bloggers created the list. He repeated there is no official definition of what a sanctuary city is, either legislatively or judicially.

Ramirez said it’s now everyone’s opportunity to contact their state representative and tell them to vote against SB 4.

The final discussion was on paths to citizenship.

Ramirez rhetorically asked why do Hispanics live in fear. He answered because they broke American laws of immigration.

“The system caused this problem,” he said. “This was before Trump. Congress voted in 2014 to follow the immigration laws of the U.S.”

Ramirez said now individual immigrants will be looked at on a case-by-case method. Some will have problems, some won’t.

“The focus now is on criminals. That will take two to three years to process,” he said. “Take that time to prepare. Come out of the shadows into God’s light.”

He added that things have been proposed pertaining to immigration, but there have been no laws written yet or any executive orders issued. He urged residents to check the expiration date on their immigration card and if they have a problem with the law to take care of that.

Ramirez said immigration is not just a Hispanic issue as a friend of his from the Middle East was trying to become a citizen.

The U.S. Citizenship and Immigration Services website has all of the immigration forms needed at www.uscis.gov.

The American Immigration Lawyers Association, www.alla.org, can answer questions. Additionally, an immigration attorney is scheduled from 12 to 1 p.m. on Wednesdays on the radio at KBPO 1150 AM.