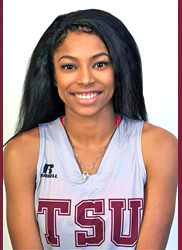 HOUSTON (AP) — Joyce Kennerson of Port Arthur poured in 29 points, including the clinching free throw with 4.7 seconds left, and Texas Southern earned its first-ever NCAA Tournament berth with a 70-66 win over Grambling State in the Southwestern Athletic Conference championship game on Saturday.

Breasia McElrath added 10 points for Texas Southern, which played in three-straight Women’s NITs from 2013-2015. Prior to that, Texas Southern made back-to-back appearances in the NAIA Tournament in 1981 and 1982. In 2014, Texas Southern finished as the runner-up in the SWAC Tournament, the closest the program had ever gotten to an NCAA berth in recent years.

Grambling State was led by John’ea Thompson and Shakyla Hill with 23 and 21 points, respectively.

Grambling State led most of the first half, the big lead being eight, as Thompson scored 16 points.

In the third quarter, Grambling State and Texas Southern traded run for run, with neither team being able to pull away. By game’s end there were 14 lead changes and seven ties.

With just 10 seconds left at the end of the third, Grambling State’s Bre’Nae Andrews scored her only a basket, a 3, for a 51-49 lead entering the fourth quarter. Grambling State had missed its first 10 3s and finished 3 of 17.

In the opening 4:24 of the fourth quarter, Texas Southern outscored Grambling State 11-5 to stretch its lead out to 60-56.

With eight seconds left, after a steal by Hill, Grambling State’s Chantiara Lewis missed a layup, which would have tied the game.

Texas Southern sealed the victory at the free throw line hitting 3 of 6 at the charity stripe in the final seconds.

Grambling, which hadn’t won a league title in 17 years, hasn’t been to the NCAA Tournament since 1999.

PREP ROUNDUP: Trahan, LaBure each punch out 13, but…