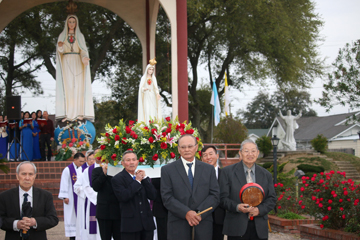 Queen of Vietnam was the first Vietnamese parish formed in the United States. The church celebrated their 40th anniversary on March 4.

The Queen of Vietnam Church was a historic first for the city of Port Arthur 40 years ago.

It was the first Vietnamese parish formed in the United States.

The church held a 40th anniversary on March 4 with a dinner and a Mass celebrated by Bishop Curtis Guillory along with local priests and past priests.

A rundown of the past 40 years shows how far the parish has come and how far they can grow:

Bishop Warren Boudreaux gave permission to have the first Vietnamese Mass at St. Mary’s Church in Port Arthur. On March 3, 1977, the church became part of the Diocese of Beaumont and started as Queen of Peace & Martyrs Church, the first Vietnamese church in the United States.

The church was granted permission by Bishop Bernard Ganter to buy the Baptist church at 801 Ninth Ave. in Port Arthur in October 1977. The church’s current location.

The Shrine of Peace is 20 feet wide and 35 feet high statue of the Virgin Mary. The statue started as 12 feet in height and was designed and worked on by artist Pham Thang. Pham stopped working on the statue due to personal reasons. The completion of the statue was handcrafted and finished by their parochial vicar, the Rev. Vu Khiem Cung.

Around 2012-2013 a priest from Vietnam volunteered to update the statue of the Virgin Mary at the Shrine of Peace.

On Aug. 31, 1981 the city of Port Arthur renamed Ninth Avenue to the “Area of Peace” from Thomas Boulevard to Procter Street.

Due to growth, the congregation asked the diocese permission to build a new church in May 1997— 20 years after the church formed.