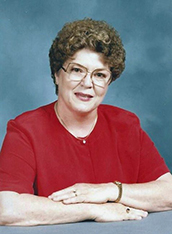 The beautiful soul of Colleen Vice of Austin, Texas, left our world on March 6, 2017.  Born in San Pedro, California on June 5, 1931, Colleen was born into a naval family and called many places home, including Bremerton, WA; Norfolk, VA; and Denham Springs, LA. Raised during the post-depression and World War II eras, Colleen was an independent, resourceful, and conscientious daughter, sister, wife, mother, grandmother, aunt and friend.

Colleen was Valedictorian of her high school class and attended nursing school in Louisiana.  It was while attending to a World War II soldier that her patient introduced her to his visiting brother, Preston Vice.  She and Preston married within months and made their home in Port Arthur, Texas.  Colleen and Preston were devoted partners until Preston’s death in March 1983.

Colleen was beloved by all that knew her because of her warmth, generosity, and spirituality. She was devoted to the Catholic Diocese of Beaumont, where she was the longtime executive assistant to the chancellor-vicar general’s office.  She was also actively involved in parish and diocesan ministries, especially at St. Catherine of Siena in Port Arthur.  She was also a volunteer and Board Member of the Southeast Texas Hospice.

She was preceded in death by her father George Myron Callahan, who survived the sinking of the Yorktown at the Battle of Midway and other harrowing battles in the Pacific arena; her mother Nadine Kinney Callahan, from whom she learned her culinary skills and love of books and opera; and her sister Sylvia Callahan, who was her traveling partner and to whom she lovingly referred to as the “pest” (herself being the “nuisance”); and by her son-in-law Greg Turner, aka Big Daddy or Chief, who called her every day to “see what she was cookin’.”

She was the loving and devoted mother of Bradford Vice of Ventura, CA; Darrell (Sylvia) Vice of Nassjo, Sweden; Elizabeth Turner of Austin, TX; David (Deann) Vice of LaMarque, TX; and Jeffrey (Sandra) of Austin, TX.  She doted on her nine grandchildren, three grand-puppies, and several great-grandchildren.

Intellectually curious, a voracious reader, and gifted with an incredible memory, Colleen was relied on for her advice and knowledge.  She had a long-standing appointment to watch Jeopardy, where she easily answered questions that stumped lesser beings.

Visitation to be held on Friday, March 10th, between 5:00 p.m. and 8:00 p.m. at Melancon’s Funeral Home, located at 1605 Avenue H, Nederland, TX with a vigil service at 6:00 p.m. with Deacon Ivan Watson officiating.  A Mass of Christian Burial will be held at St. Elizabeth Catholic Church, located at 2000 Nall Street in Port Neches on Saturday, March 11th, at 10:00 a.m. with Msgr. Kenneth Greig and Rev. Shane Baxter officiating. The interment will be at Greenlawn Memorial Park in Groves, Texas.

The family asks that in lieu of flowers, donations be made to Southeast Texas Hospice or Hospice Austin, the Dominican Sisters of Houston, or other charity of choice.