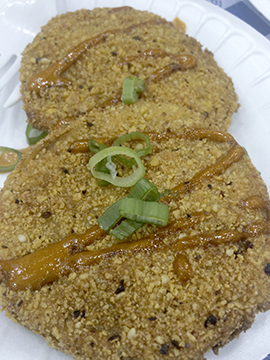 Taste of the Triangle gets the flavors out

I got extra proud seeing Mid-County flavors represented at Taste of the Triangle, Fat Tuesday at the Beaumont Civic Center.
Rodair Roadhouse produced a mini-version of their rustic digs and won the best restaurant booth title. I’m sure they’re going to be selling even more fried green tomatoes after this honor. It was a marvel that they could serve up food that tasted just as good as if you were sitting in their rustic restaurant, minus the dance floor. Clever bonus: they were showing a video of the movie “Fried Green Tomatoes.”
The Wheel House represented, as did Karen Theis who served up some of the best food her Courtyard Café has to offer.
The crowds kept coming to the end and I heard raves about ribs from Cheddar’s, Nothing Bundt Cakes bites, the ever-popular white chocolate bread pudding of Moncla’s and goodies from Tequila’s, Jason’s Deli and Bettie Jean’s. MCM Elegante is serving pizza and they offered samples of some with an Asian flair and others with a boudain topping.
If you didn’t know, all this feasting, with Mike Zito fans dancing in the background, was for a good cause. Sabine Area Restaurant Association raises funds for scholarships for area students and for charitable organizations.
Other Taste of the Triangle winners:
El Habanero, best restaurant first runner up; Lupe Tortilla, best restaurant second runner up
Dat Mac for best-decorated booth, which featured a photo stand with fun props
Best Associate Booth: Lamar Hospitality, winner; Pop Central, first runner up
IHeartRadio won best media booth and KBMT/KJAC took first runner up
If you have some Culinary Thrill Seeking topics to share, contact darraghcastillo@icloud.com

The Texas Department of Public Safety has released the name of a woman who died in a head-on collision on... read more