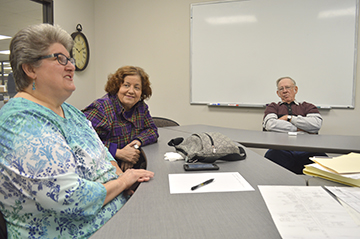 A project to record the history of Port Neches by first hand accounts is near completion.

“In 2013, Beverly Evans and Nola Martin (with the Effie and Wilton Public Library) conducted 42 interviews of 75 Port Neches residents who in turn shared 17 hours of their memories of town, school business and their lives with us,” library director Mark Durham said. “Most interviews centered around individuals and their families but some were conducted with multiple people and/or revolve around selected topics.” 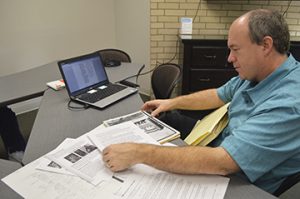 Mark Durham, director Effie and Wilton Hebert Public Library, sifts through a folder of historical documents that have been digitized for the library’s oral history project.
Mary Meaux/The News

The Port Neches Oral History Project will soon be completed and patrons can go to the library website and listen to the stories and see the written history.

“Beverly Evans was the catalyst for all of this,” Martin said.

And it all started with a question about a 1948 Little League photo. The photo, which showed longtime resident Jimmy Stefflen as a youngster in the city’s first Little League, also showed a scene from the early days of the city.

“She (Evans) said she wanted a get-together and get people’s memories,” Martin said. “She knew everybody in town and all but one person agreed to participate.” 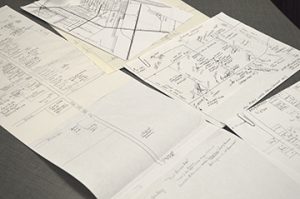 Stefflen recalled how Port Neches Avenue was a main roadway and “old town” referred to an area off Grigsby but before the “Little Abbeville” area.

In his earlier days his actual address was “the second cut between Lambert and Kitchen Road” referring to the cross streets in that area. Lambert is now Nall/FM 365 and a portion of the old Kitchen Road is now Merriman.

“You have to preserve the past for the future and present it to the new members of society, the youth. If they only know the words to the fight song and how good the splash park is, that’s not enough,” Martin said.

Angel Hernandez, another longtime resident, recalled Camp Neches, a place for the men and their families who built the city’s rubber plants.

Stefflen also remembers a time when the now-pristine Port Neches Riverfront Park was a dump, literally. The river was polluted and trash was piled up several feet deep.

The participating, members had fun with a stream of conscious talk as one memory flowed to the next. Areas of town were mapped out as members recalled the names of different businesses or families who lived along the city.

“I appreciate the library trying to preserve history through the old timers and taking up where W.T. Block left off,” Stefflen said.

W.T. Block was a local historian who published books and articles and the history of the area.