PA Councilman trying to get city logo on water tower 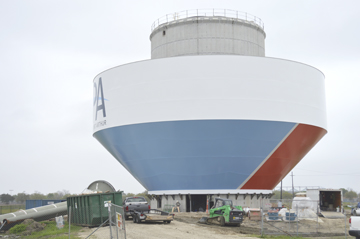 Councilman Willie "Bae" Lewis Jr. is in a race against time to get the city logo on this brand new tower before it is raised on March 20 and to also get the community involved.

A new water tower on Terminal Drive where Carver Terrace Apartments once sat has a Lamar State College-Port Arthur logo and a U.S. Coast Guard logo painted on it. Missing is a city of Port Arthur logo.

Councilman Willie “Bae” Lewis, however, is trying to get the city’s logo on the water tower before it is raised on March 20 and to get the community involved.

Calvin Prosen, senior project manager with the Port Arthur engineering firm of Arceneaux, Wilson & Cole, said the reason the city of Port Arthur logo was not already painted was the city was in the middle of a rebranding campaign. The city council voted last week to keep the current city logo and the race is on to get it painted on the tower.

It will take a day or two to size and paint the logo at a cost of $22,000. The question of who will foot that bill has yet to be answered.

He said LSCPA and the USCG are important assets to Port Arthur and that’s why their logos are on the tower.

The tower is being built for Cheniere Energy. The city will provide water for them. In turn, they will buy water from the city for their facility in Cameron, Louisiana.

Prosen said Cheniere has spent more than $90 million with the city to do this project.

Lewis said Cheniere has $7,000 in their fund balance they can apply to have the logo painted. The remainder of the money needs to be found by early next week before it’s too late.

Lewis said Mark Porterie, superintendent of the Port Arthur ISD, is also interested in the project as a way to get students involved.

Prosen estimates the water tower will start to be raised at daybreak on the morning of March 20 and it will take about four hours to complete. A tent will be set up on the grounds and lunch will be served.

Arceneaux, Wilson & Cole would like to invite everyone involved on the project.

“We want it perfect,” Prosen said. “We want it to be something everyone is proud of. We hope we win an award with this tower.”

For more information on getting the city logo painted on the new water tower, contact Calvin Prosen at 409-351-1123 or calvin.prosen@awceng.com.