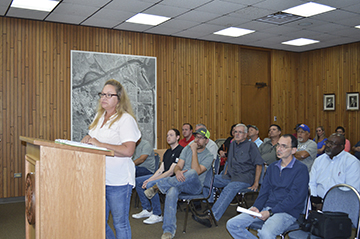 GROVES — A proposed apartment complex in Groves got the thumbs down by a number of city residents earlier this week.

A joint public hearing of the Groves City Council and the city’s planning and zoning board was held on Monday for the Gates of Groves apartment complex to be located on 5.6 acres of land on the south side of Texas 73 and Texas 87. Houston Housing Group LLC is seeking a specific use permit to build the 150-unit complex.

Andrea McDaniel, project manager, told council the apartments would be one, two and three bedrooms with one and two bathrooms, the smallest of which would be 1,000 square feet and the largest at 1,182 square feet.

The complex would also have a clubhouse with a fitness center, business center, laundry, pool and on-site management with McDaniel taking that role, she said.

“These are not government subsidized in any way,” McDaniel said. “There is a group of investors that I represent and they are in it to make a profit.”

McDaniel also said the residents would be fully vetted with criminal and financial background checks with potential residents being families who are permanent workers who will be at local refineries that are going to be expanding.

There would also be a six-foot concrete wall against Warren Street and another six-foot fence around the complex.

“We know Port Neches-Groves Independent School District is the best school district in the county,” she said. “We have a lot off potential families coming in that feel PNG is the best.”

While no one within 200 feet of the proposed apartment complex spoke either for or against the issue, there were a number of people who came to the podium to express their dissent.

Kim Pham lives not far from the area and worried that the schools wouldn’t be able to handle an influx of extra students and that traffic would be a major problem as apartment residents would use Garner Street as a cut through.

Tu McDaniel, who also lives on Garner Street, did some homework on the issue.

“We started construction of our home in 2015 and just moved in less than a year ago. There are over 400 apartment units in the city,” Tu McDaniel said. “I think if you look at the owners of the proposed project you have a good indicator of what’s to come. Axis Manor (on 25th Street) has issues already. There are items that need to be fixed. Is this a bait and switch? Show us what’s pretty.” 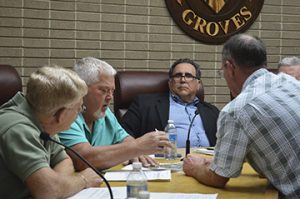 Tu McDaniel also wonders if the residents, who are said to be refinery employees, will still be in apartments raising a family 10 to 15 years form now. She also worries about a three-story apartment building overlooking her backyard and possibly see inside her home.

“The city needs quality not quantity. We need good quality,” she said, naming off a list of new subdivisions in the city. “The city needs to set the bar. If you believe this is all Groves has to offer … Groves can do more and be more but you have to accept more.”

Bud Porter, also of Garner Street, is known to watch traffic and yell if people drove too fast while children are around. He hated to see Walmart leave more than a decade ago but has grown accustomed to a lessened amount of traffic. He would rather see subdivisions, such as Indian Springs, then more apartments.

He also questioned Andrea McDaniel’s statement that refinery employees will raise their families in apartments as opposed to buying a home.

No decision was made on Monday night. The planning and zoning commission was set to meet Tuesday night and bring their recommendation to city council in two weeks for a vote.